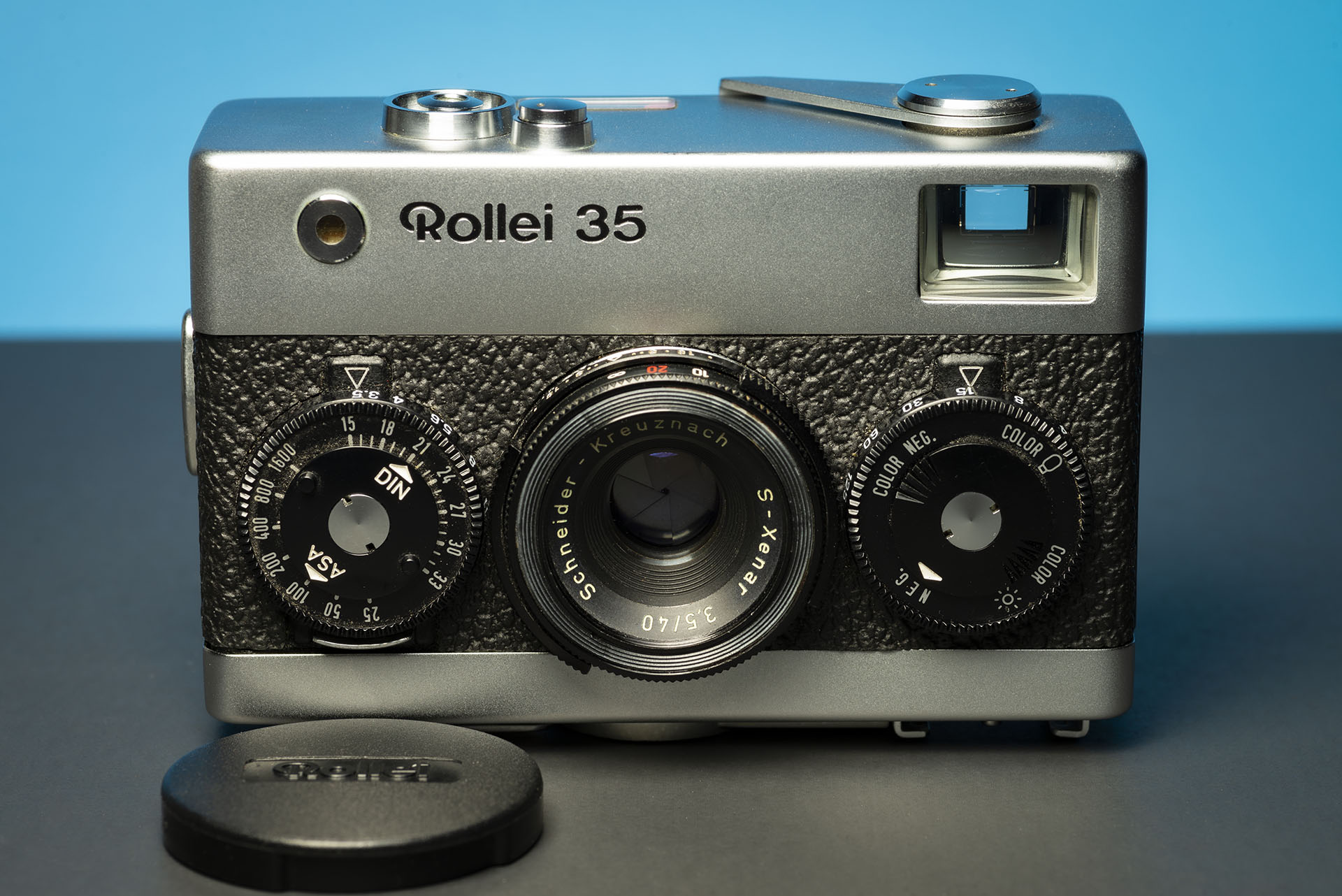 I can’t remember ever NOT wanting a Rollei 35 since I first saw one in the wild.  Every pro I knew had one tucked away somewhere in their massive Domke F2 bag or in a pocket of their fashionable photojournalist vest.  For many years it was the smallest full-frame 35mm camera available, even smaller than some of the half-frame 35s.  Its German optics and engineering were superb, as one would expect from Rollei.  It was designed by Heinz Waaske and produced in Germany from 1966 to 1971.  Production was moved to Singapore at the end of 1971 and various iterations were produced there until general production ceased in 1981.  A few special edition versions were produced in Germany after that until 2015.

The miniscule size required limitations in features and ergonomics, but without compromise in quality. Optically it is a gem, with legendary Schneider-Kreuznach glass in the S-Xenar 40mm f3.5 lens.  Other models and variations have Zeiss glass, including Sonnar, Tessar, and Triotar lenses.  The shutter speeds range from ½ second to 1/500 as well as a Bulb setting.  There is a film type reminder on the front of the shutter speed adjustment dial.  Apertures for this model range from f3.5 to f22 on a locking dial.  On the front of the aperture dial there is an ASA/DIN scale. On the top there is a match-needle meter linked to the front CDS cell made by Gossen.  There was apparently no space available for a coupled rangefinder, but there is a generous bright line viewfinder with parallax compensation lines.  (The Rollei 35 is scale-focus only, requiring distance to subject to be estimated and set accordingly.)  The excellent Compur leaf shutter was redesigned by Herr Waaske to accommodate a collapsible lens.

The tiny design also resulted in some quirks. For example, the hot shoe is on the bottom of the camera, rather than the top.  Shooting with a shoe-mounted flash hanging below the camera creates odd shadows on the subject.  (Solution:  turn the camera upside-down and the flash is now on top.) The film advance lever is located on the left side, instead of the more common placement on the right.  The frame counter is oddly located around the tripod mount on the bottom.  I am equally quirky, so we get along just fine.

Taking photos with this piece of jewelry initially requires a little patience and presence of mind, but it only takes a roll or two for the controls to become familiar.  In practice, I simply look down at the top of the camera to read the meter and change settings.  Shutter speed, aperture, meter, focal distance, and the depth-of-field scale are all visible at a glance and easily adjusted with my two index fingers while holding the camera upright.  There is method in the madness after all.  There are only four features on the top plate of the camera:  film advance lever, shutter release, light meter window, and the button to unlock the lens.  The shutter release and the unlock buttons are a bit close, and it is easy at first to push the wrong one.  I will probably install a low-profile soft release to avoid that.  The shutter is uncoupled when the lens is retracted, so there is no chance of wasting a frame while packed away in a case, bag, or pocket.

This one is not nearly as battle-scarred as others I see.  Due to the small size and boxy shape, keeping a good grip on the little thing is difficult at times.  Rollei 35s and gravity have had a long but toxic relationship, and most have dents in the thin metal tops and baseplates. I always use the original wrist strap, even though it looks like an oversized charm bracelet in dim light.

I had my eye on this camera for a couple of years.  Its original owner was a commercial photographer who used this as his motorcycle trip camera.  He kept it displayed in his shop as part of his private collection.  Some time ago I asked him to tell me first if he ever decided to sell it.  He closed his doors and retired this year, but not before giving me a call to graciously offer me the Rollei.  He had already sold me a Rolleiflex TLR, so the siblings would be reunited.

Had I not seen it carried and used by so many professionals back in the day, I could have easily dismissed it as a novelty, far from being a serious camera.  Make no mistake, the Rollei 35 has the heart of a warrior despite its deceptively small presence.  It’s a bit like my parents’ ultra-compact dog (a teacup Yorkie) which chased a bull elk through their front yard as I watched, equally amazed and amused.  That elk and I were both reminded that size is a poor measure of potential.