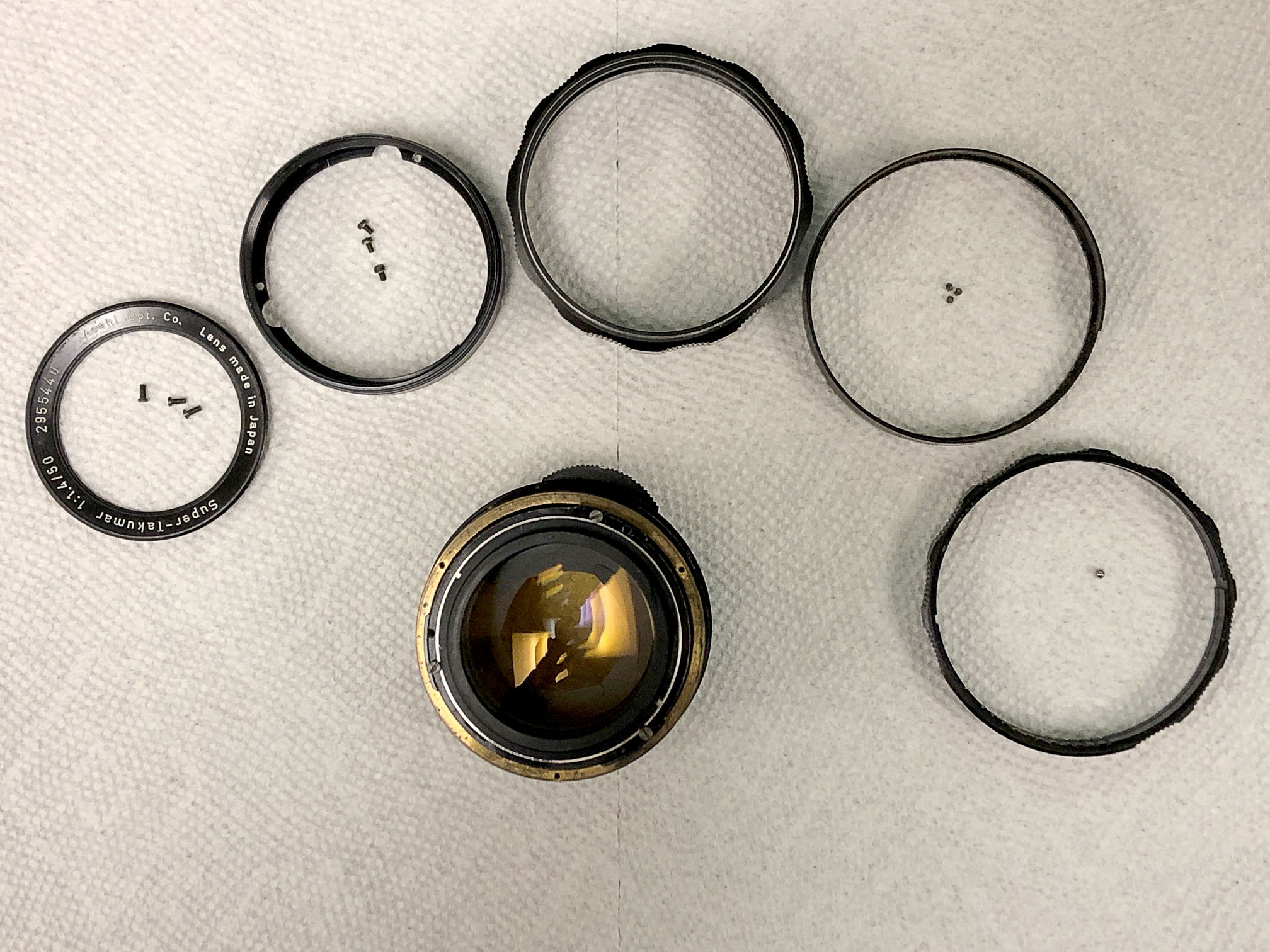 I pulled this lens out of a box and pondered its fate in a Shakespearean moment not unlike when the gravedigger handed Yorick’s skull to Prince Hamlet. The radioactive Super-Tak 50 had attained almost a legendary, cult status, but I had never owned or used one.  I was excited upon reading the nameplate ring that I would get a chance to test it and see if it lived up to its mythology.  Then I angled the lens toward the only light source in that corner of the attic, and my heart sank a little.

The inside of the lens looked like an 8th-grade science fair exhibit.  Fungus had taken over the front element group and left it nearly opaque. What I was able to see beyond the fungus didn’t inspire much hope, either.  The aperture blades were swimming in oil and moved only in slow motion.  Oil had somehow migrated throughout the interior of the lens, coating the glass and even oozing from the mount. I wondered if it had been sprayed with WD-40 in a misguided attempt to free up a stiff focusing ring.

It sat for a couple of weeks as I weighed my chances of rescuing it. I was confident that I could strip down the lens enough to clean up the oil, but the fungus had me worried.  Lens fungus often leaves the surface of the glass permanently etched, turning a sharp lens to soft-focus over time.  The most helpful source of information was Chris Sherlock, who is better known for his work on Kodak Retina cameras.  His walk-through of the Super-Tak tear-down was just what I needed.  I prepared my usual workspace mise en place and started digging.

Fortunately, the fungus came right off with no hint of permanent damage.  I soaked and scrubbed each component until it was all free of grease and oil.  I managed to reassemble it with no leftover parts, and that is when I saw the signature yellowing of the radioactive glass elements.

I knew some versions of this lens had thoriated glass elements. The use of thorium oxide in lens glass resulted in better optical properties.  The downside, of course, is that thorium is a radioactive element.  The radioactive decay over time results in crystallographic defects in the glass known as “F-centers” which change the color transmission characteristics of the glass.  The result is a yellowing or browning of the lens.

There is abundant misinformation floating around the internet about the dangers of radioactive lenses.  One must understand that thorium is primarily an alpha emitter, and as such, poses far less of a danger than beta or gamma emitters.  Alpha particles only travel a few inches in the air, and do not penetrate even the slightest barriers such as skin, paper, or camera shutters.  I confirmed this with my own Geiger counter.  Much like your average corn dog, it poses no danger when used properly. Since the weak alpha radiation is harmlessly absorbed by the camera or the rear lens cap, very little reaches the user.  Out of curiosity, I also conducted a 36-hour test in which 100 ASA film was in constant contact with the thoriated rear element.  No fogging was visible once the film was developed normally.

Thoriated glass was eventually replaced by lanthanum-doped glass, which provides similar optical properties at only a tiny fraction of the radioactivity.  I tested my Industar 61 L/D lens with my Geiger counter and could only detect a slight increase over normal background radiation.  In contrast, as I was testing the Super-Tak, my oldest son heard the Geiger counter from the hallway, poked his head in and said, “Wow, that’s an angry one.”

I mounted this lens to a Sony A6000 with an M42 adapter and carried it for a couple of outings, one in downtown St George, Utah, and on a short hike to Lava Point, Zion National Park.  Despite its classic brass-and-glass construction, it only weighs 230 grams or a little over a half pound. The current Nikkor AF-S 50mm f1.4G weighs 280 grams by comparison.  Perhaps it just feels more dense due to its much smaller size and lack of plastic.  The feel of the lens is important to me.  I like positive clicks on the aperture ring, and a metal focus ring that requires deliberate effort to turn.  I had just cleaned and lubricated the lens, so it functioned smoothly as intended.

I found that the lens performs best in the middle apertures, as expected. Unsurprisingly, it has a bit of a glow at f1.4, and diffraction becomes visible at f16.  What really impressed me was how it rendered certain scenes.  I can’t quite define or describe it, but there is something that stands out among other lenses.  It may be the yellowing glass, but that would largely be cancelled out by the auto white balance setting on the camera, which I used.  Colors are rendered richly but honestly, even with a neutral in-camera profile.  Inherent contrast may be a bit lower than modern lenses.  The lens is certainly sharp enough to live up to its hype.  The bokeh, albeit a very subjective characteristic, is pleasing to my eyes.  I find it smooth and non-distracting in most cases.

I heartily recommend this lens for the arsenal of any legacy lens aficionado.  It embodies everything I enjoy about classic glass. There are a lot of 50mm lenses in the world (and on my shelves) but this lens stands out as one to keep.