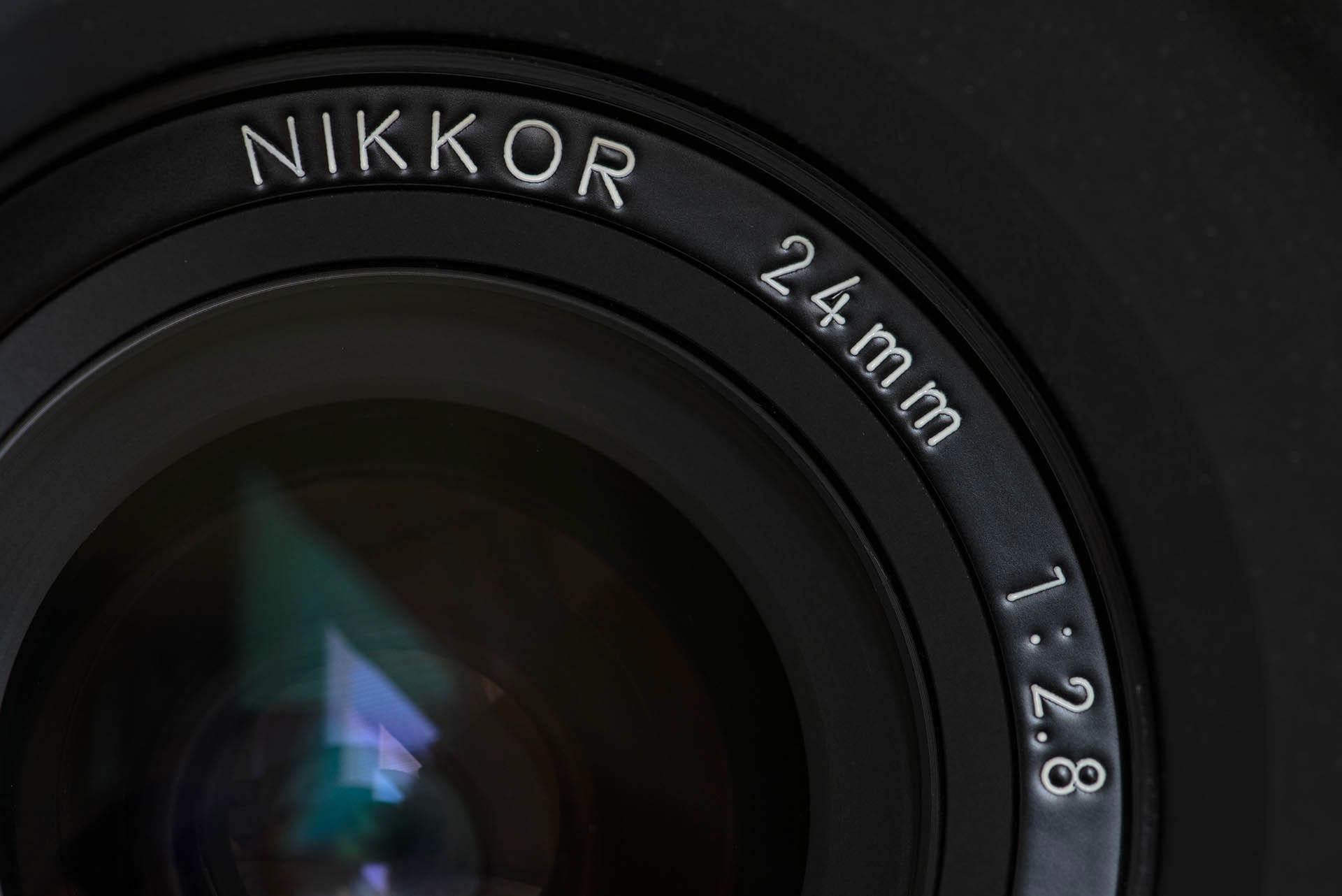 I already had two 28mm Ai Nikkor lenses, making it difficult to justify even looking at a 24mm.  They’re not so different after all, right?  I made the mistake of taking my friend up on his offer to borrow his Ai-converted 24mm f2.8.  I was immediately convinced I needed one.  I sold one of the 28s and started hunting, eventually finding the perfect 24mm f2.8 Ais Nikkor.

With moderately wide to normal lenses, there is a certain amount of realism in their natural perspective and field of view.  They transmit the world much as we see it.  Telephotos are effective at isolating details and drawing the viewer’s attention to singular subjects, eliminating the extraneous.  For me, using 24mm (and wider) lenses is like poking my head through a tiny window into a large room full of amazing things I had never noticed before.  The challenge becomes using those amazing things to tell a story.  I find it more difficult to “see” in a wide-angle perspective.  I think our brains are accustomed to our natural perspective, and quite capable of mentally cropping to pre-visualize a telephoto shot, but it must be trained to think wide.  Telephoto lenses are exclusive, whereas wide-angle lenses are inclusive.

When using an ultra-wide-angle lens, one is often faced with the overwhelming task of sorting the important compositional elements from the distractions.  Converging lines and vanishing points seem to appear out of nowhere.  Just a few inches of movement relative to the subject can either reveal great framing and leading lines or destroy the composition altogether.  I am constantly scanning the edges of the viewfinder, and often become aware of intrusive elements that will draw the eye away from the subject.  Recently, my untied shoelace became one of those intrusive distractions.  That is a legitimate wide-angle problem.  If that becomes an issue when using a telephoto lens, a visit to the chiropractor is likely in order.

This lens became my default lens for night sky photography.  My town is surrounded by high desert wilderness and mountains, creating the perfect environment for a dark sky.  The global pandemic dramatically reduced air travel, resulting in a night sky largely free of the usual airline traffic.  The timing of the spectacular comet Neowise coincided with remarkably clear skies, and we took full advantage of that.   I also find 24mm to be a great focal length for incorporating the milky way into a shot with interesting foreground features and context.  Moreover, the shorter the focal length, the longer one can expose the image, at a lower ISO, without star trails becoming apparent.

This version of the lens has been produced for 44 years and counting.  That’s an impressive run for any single product, particularly in a field driven by continuous innovation.  There is nothing game-changing about this lens—it is just an honest workhorse.  It has a nine element, nine group configuration, with a minimum focal distance of 1 ft/0.3m and close-range correction (CRC).  It weighs 9.7oz/275g, has 7 aperture blades, and an aperture range of 2.8 to 22.  It shares the 52mm filter diameter with many other Nikkor lenses.  The focus ring has the smooth, deliberate movement I expect from all manual focus Nikkor lenses.  Fit, finish and engineering are all pure Nikkor.  It has a solid, professional feel about it.

I consider sharpness to be secondary to character for legacy lenses, but this one has both attributes well covered.  After 44 years of production, it has become a mature design.  Any glaring flaws would have been eliminated by now.  Some will complain about what is referred to as “mustache” distortion, which this lens design exhibits to a small degree, besides the typical barrel distortion of an ultra-wide.  I had to intentionally photograph a brick wall perpendicular to the line of sight to even detect it.  It is harder to correct than pincushion or barrel distortion, but it is not enough to scare me away from using it.  There are other lenses available for geometric perfection if that is a deal-breaker.  In most landscape photos, the tiny amount of distortion will be insignificant.  Galen Rowell was very fond of this lens and used it regularly.  That’s good enough for me.

I have been using this lens on film and digital bodies, and it is perfectly at home on both.  In my bag it permanently resides right between a Nikon D610 and an FM2 or F3 film body. I rarely use it wide open, even though it has great center sharpness at f2.8.  With most of its intended uses, I generally want plenty of depth of field, which the 24mm delivers.  In the occasional photos of close-up subjects, the transition to out-of-focus background is gradual and natural-looking.  Every time I bring the camera up to see the world through this lens, I remember why I got it.