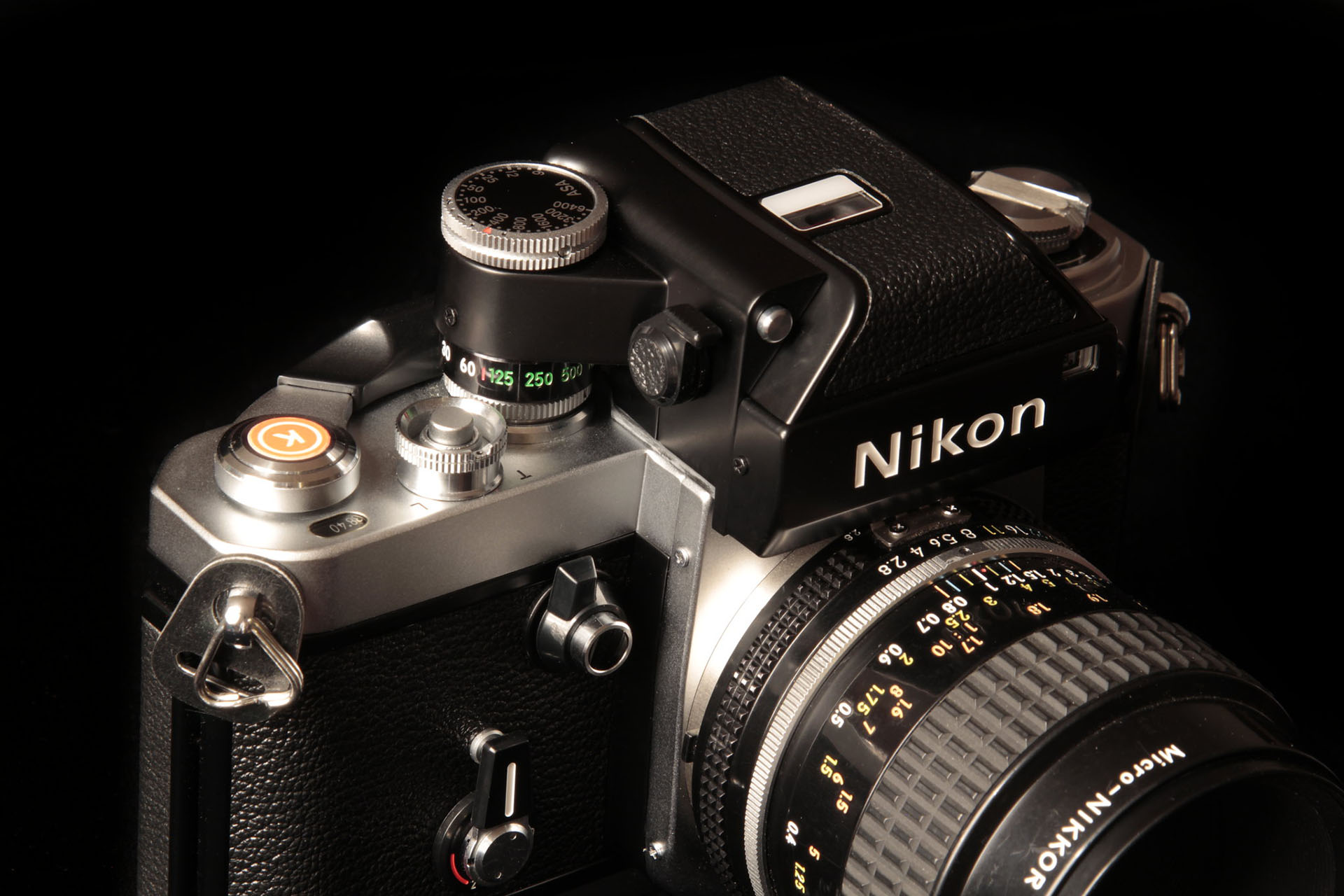 “Try not to use the words legendary or venerable…you’ll sound like a fanboy.”

I remember grizzled old staffers still clinging to their battered F2s, even though the F3 had been out for several years.  I recall at least one that purchased his F2 from the newspaper when they switched to the newer model, just so he could keep using it.  That kind of mechanical monogamy deserves its own discussion, perhaps for another time.  The Nikon F2 inspired that kind of loyalty.

I happened across this one in the last camera shop in town (sadly now closed) as a consignment item.  I do not know the provenance, or much of a back story, but it appears that the owner had purchased it with several lenses, and never used it.  It came in the original box with papers, plastic, and Nikon desiccant pack.  What it did not include was any sign of having been used.  There was still a sticker on the film advance lever indicating which focusing screen was installed.  Despite sitting unused for decades, it still worked perfectly.  While I am a collector, I am also a user.  I derive some satisfaction from possessing it, but for me the real joy is in using it.  I wrestled with the idea of reselling it to an avid collector and buying a truly used one, but ultimately decided to allow it to fulfill the measure of its creation and actually take photos with it.  I am not sorry.

Nikon’s dynastic F series cameras certainly made their mark on photographic history. The original F model was introduced in 1959 and was the first 35mm SLR to be widely adopted by professionals.  Modified Nikon Fs even went into space and were used on the Skylab space station.  The F2 came along in 1971 with some added options and improvements over the F.  Among those are a higher top shutter speed of 1/2000 second, a hinged back door, a wider array of metered prisms and focusing screens, and a repositioning of the top controls for better ergonomics.  The F2 was also completely mechanical, with batteries required only for the metered prisms or the optional motor drive.  The F series continued with the F3 through F6, but the F2 was the last of the mechanical pro-level Nikon SLRs.

Specifications are as follows:

I should mention the unique shutter characteristics in greater detail than a list of specs.  The shutter mechanism itself is entirely mechanical, with horizontal titanium curtains.  The shutter speed dial is marked in white from B to 60.  Then there is a red vertical line, followed by 125 to 2000 marked in green.  “B” is the bulb setting, at which the shutter stays open for as long as the shutter is depressed. 1 through 60 represents one second through 1/60 second shutter speeds.  The red line is the flash synchronization speed (x-sync) which occurs at 1/80 of a second.  The interesting thing is that the shutter speeds above the flash sync, marked in green, are stepless, allowing more precise shutter speeds between the marked settings.  This offers greater exposure control, which is particularly useful with transparency film. Also, while the dial itself only shows shutter speeds down to one second, exposures between two and ten seconds are possible by setting the dial to B, rotating the shutter button collar to T, setting the self-timer to the desired shutter speed (2-10 seconds), and pressing the shutter release.  It’s not very intuitive, but it works.  Without reading the manual at least through page 13, one might not even know about this feature.

There is a certain thrill in driving a well-tuned sports car, but when you need a truck, nothing else will do.  That’s what this is.  It is arguably a bit boxy, heavy, and over-engineered.  It is all business, with nothing superfluous.  Of the hard-working F2s I have seen over the years, many of them have sustained damage that would have been catastrophic to most other cameras.  I believe their weight probably contributed to their propensity for being dropped.  (I have joked that the black leather ‘ever-ready’ case should have been shaped like a blacksmith’s anvil.)   Perhaps that’s why I was so excited to find a mint-condition F2 in the wild.

Part of the joy of photography for me is the wide variety of equipment available.  Each camera and lens has its own quirks, characteristics, flaws and charms.  There are many classic mechanical cameras out there, and if they hold the film flat and let in the right amount of light, they will do the job when paired with good glass.  That is the pragmatic me talking, but I really can’t ignore the nostalgic romance of taking photos with a legendary camera like the venerable F2.  The solid build, mechanical precision, smooth function, fit and finish all contribute to a user experience unlike that which I get with most other cameras.  It feels good in the hand and inspires confidence. It may be a dinosaur, but it was the apex predator of its time.

Although I believe in using my cameras, I also believe in taking good care of them.  If this F2 ever does sustain any visible damage, I can guarantee that I will be in a worse condition, but not without a cool story.  When I wake up in the hospital, somebody better be there to tell me that the camera is all right.  I’m allergic to flowers, so please, just develop the film and put the prints in the envelope with the get-well card.