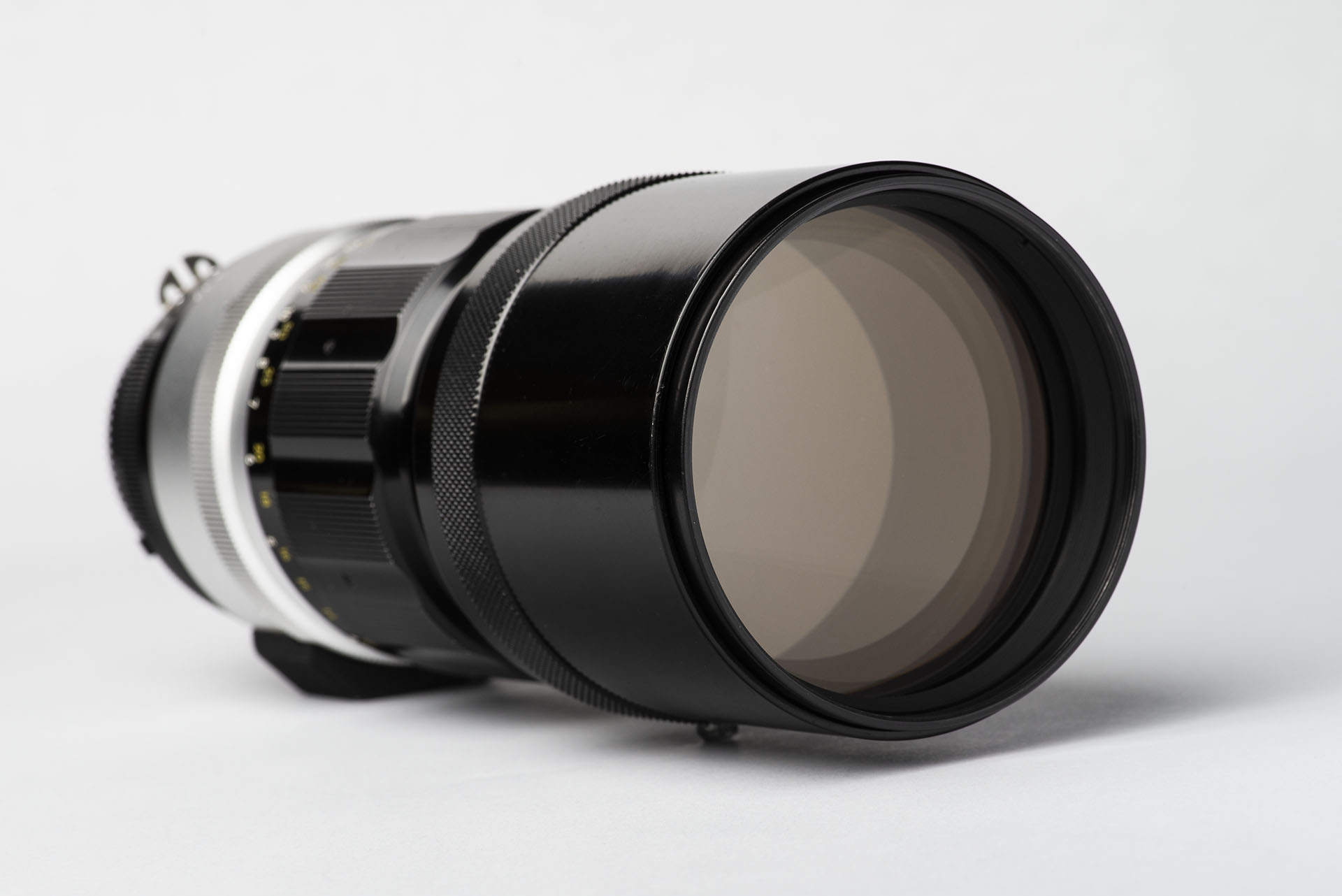 I acquired this optical colossus at my favorite camera haunt in San Antonio, during a trip that also included a stay inside an exotic animal preserve.  It was listed for sale on their website as a 300mm f4.5, but I had no idea which version it was until I arrived.  It is a pre-Ai lens with a factory Ai conversion kit installed. There is nothing small or subtle about this lens.  Its metal scalloped focusing ring and chrome mid-body distinguish it from the later, all-black version.  Metal and glass—it is strictly business and very old-school.  Even the threaded front lens cap is machined from a solid aluminum billet.

It was in excellent mechanical and optical condition, and in decent aesthetic shape for its age.   For the price of $89 I couldn’t pass it up.  I knew at the very least it would be a period-correct lens on my Nikon F and F2 bodies, but I really had no idea how it would perform on a digital body.  Short answer:  It does just fine.  For years I have wanted a nice 300mm f2.8 Nikkor prime, but the prices and the timing were always wrong for me.  I’ll get one when the price and time are right, but for now, this lens gets me almost there.

My first outings with this lens were on a 3000-acre exotic animal preserve in Hill Country, Texas.  I’ll be honest that it took awhile to get used to the cumbersome size and weight.  Photographing wildlife with a heavy tripod isn’t always ideal, so I also brought along a sturdy ball-head monopod which I affixed to the integral tripod mount on the lens barrel.  This allowed me a bit more freedom of movement, while sacrificing a bit of stability.  This proved important, because I often had only brief moments when the animals stood still long enough to compose and shoot.  I also took advantage of any stabilizing structures like tree branches or rocks.

The “sweet spot” seems to be at f8, unsurprisingly.  Even at f8, when focused on a relatively close subject, the background just melts away.  That’s the magic of a long prime lens.  It has a depth-of-field gauge on the chrome mid-body, but the lines are so close together that I don’t find it useful.  This is not a lens for using hyperfocal distance settings and hoping for the best. The throw of the focus ring is only about 180 degrees, and because of the very shallow depth-of-field wide open, it just seems to snap into focus.  Optically, there were few surprises.  Long lenses of this vintage often exhibit vignetting and under corrected chromatic aberration.  Some magenta fringe is evident in certain circumstances, but it is easily corrected in post-processing. When used for photos that do not push the boundaries of the old glass, this lens performs quite well overall.

Somebody will be asking themself by now, “Yes, but is it sharp?”, to which I will respond with a mixed answer.  I concede that it is not the sharpest 300mm Nikkor lens.  It is better than its predecessor, a 5-element Nikkor-P, and other than improved coatings, it is optically the same formula used in future Ai and Ai-s versions through 1998.  It wasn’t broken, and they didn’t have to fix it.  I’m sure the more elite ED-IF f2.8 lens is a better piece of glass, but at many times the cost and over twice the weight.  Call it a compromise, but I didn’t expect it to perform like its wealthier sibling.  I am happy with what I got for the price.

Of course, I had to allow it to spend time with its contemporary film bodies as well.  The Nikon F and F2 SLRs are equally over-engineered, and this lens was right at home.  Mounted to either of those bodies, it feels more like artillery than photography.  Beauty and beast, it performs admirably on film.

Don’t expect it to fit in a typical camera bag.  I bought a separate case; he’s a big boy who needs his own room.  The size and weight do indeed cause it to be left at home unless there is an anticipated need. That said, on recent trips though Nevada, I decided to bring it along in case I could see my favorite herd of mustangs.  The first trip was a bust, but on the second trip I managed to get a few photos from a dirt road off Highway 50 between Ely and Eureka.  The horses were wary and kept their distance, but I was happy to see them nonetheless.

Overview:  It is big and heavy, optically less than stellar, but darn it, it’s a fun lens.  It is probably not the best to catch razor-sharp photos of birds in flight, but for slower wildlife or intentional compression of perspective, it is an enjoyable chunk of glass. I have yet to shoot any portraits with it, but it will happen.  I expect this lens will stay for awhile.