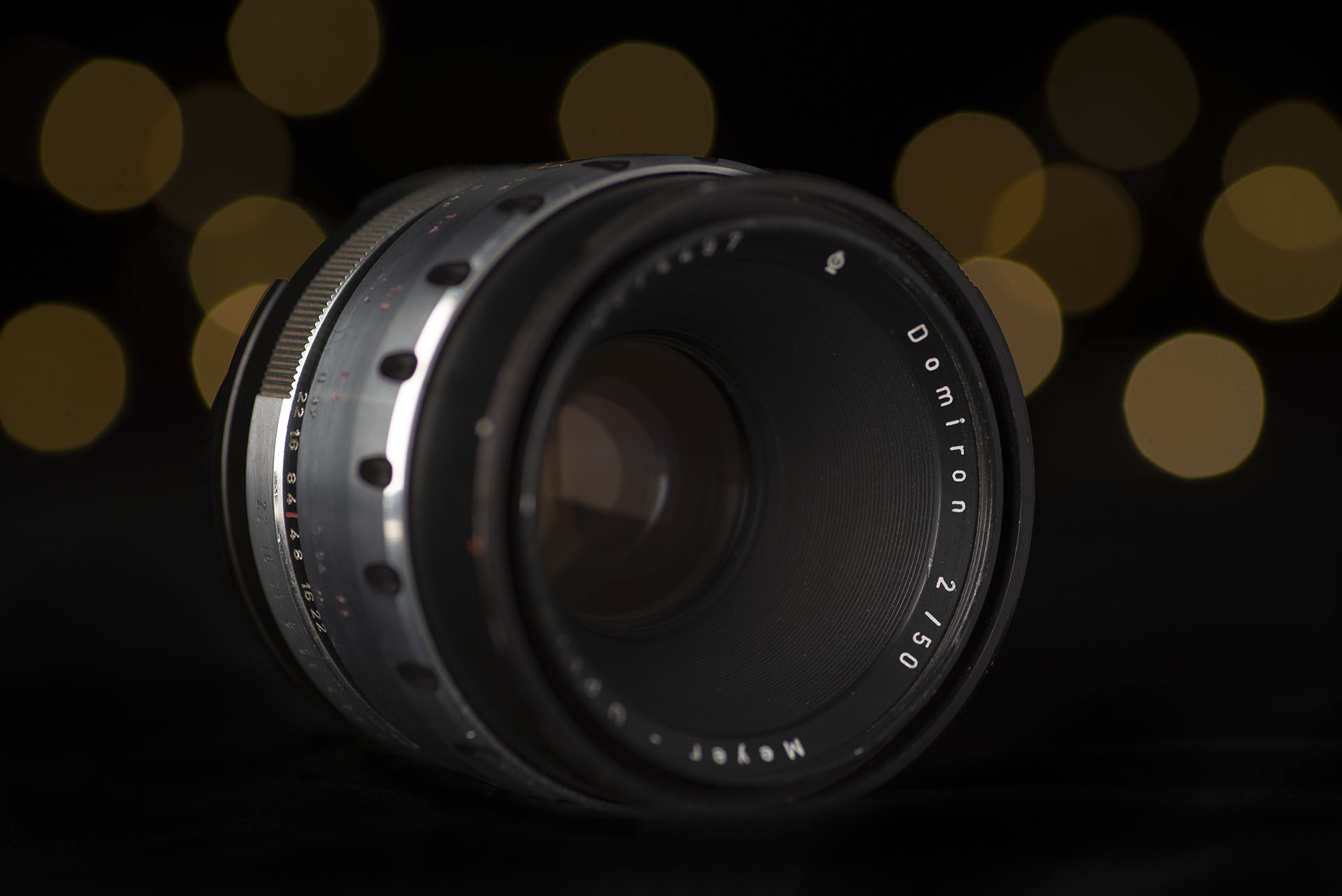 In my home I have a plant shelf with no plants on it.  It is full of cameras.  On that shelf sat an old German Exacta SLR to which I paid little attention.  The shutter curtains were full of pinholes, the lens release lever was loose, and I only handled it to dust it on occasion.  At some point I decided to thin the herd and started dumping stuff on the big auction site.  When I came across the Exacta, I looked at completed auctions and discovered that the Domiron lens residing on mine was uncommon, and the lens alone commanded prices between $400-900.  I was a bit gobsmacked to think that there was buried treasure hiding on my plant shelf all these years.

Well, the focus ring was frozen and although the aperture ring moved freely the blades didn’t close.  I researched everything I could find about disassembly and repair, and after a couple of months I spun up the courage to tear into it.  It has a floating element which made me a little nervous, but I felt like I had little to lose.  Going in from the front, I managed to get the focusing helicoid freed up and re-lubricated.  To get to the aperture I had to go in from the rear of the lens.  Upon arriving at the aperture mechanism, I discovered that there was no aperture mechanism.  Somebody had gutted it entirely.  I was crushed.

Forced to reevaluate, I decided to go ahead and purchase a simple adapter for my Sony mirrorless and try the lens sans aperture.  I could see on Flickr that the few people using a Domiron were shooting it mostly wide open anyway, ostensibly to show off the funky bokeh of which it is capable.  I took it out a few times to see what it could do and decided to keep it.

Some lenses are known for interesting character in the out-of-focus areas.  Those that come to mind are the Leitz Summitar 5cm f2 and the FSU Helios 44 series.  They, however, are known for the swirly effect.  Others are known for their soap-bubble bokeh or other signature looks.  The Domiron has a character that resembles its big brother, the Trioplan 100mm f2.8.  The out-of-focus areas with medium to high contrast tend to have a signature look unlike most modern (read:  well-corrected) lenses.  Adjectives such as jittery, nervous and caffeinated have been used to describe such character.  Specular highlights that fall well out of focus have the soap-bubble effect, wherein the blur circle is well defined with a bright rim.

Taking this lens on a walk through a botanical garden proved a bit frustrating.  I wanted to show the unique character of the lens without the bokeh becoming the subject.  I discovered that showing off the bokeh without overwhelming the subject proved difficult.  You may recall that there is no aperture mechanism. Control over the bokeh intensity had to be accomplished by choosing a subject whose background had just enough contrast and the proper distance from the subject.  I’m guessing the city Parks Department frowns on people digging up the plants and rearranging them.

Many, if not most of my older lenses exhibit a soft glow when shot at maximum aperture, particularly around highlights.  The Domiron’s wide-open glow is quite pronounced.  It is visible in most of the images included here.  Well, it is what it is, and I can either whine about it being an egregious optical flaw, or I can call it character and use it to good effect.  If I want clinical precision, there are lenses for that.  When I want character, I reach for the lens that provides that character.  Optical snobs would likely clutch their pearls and vapor-lock over an MTF chart of a wide-open Domiron.  But can it produce a beautiful image?  Yes, it can.  Is it a challenge to find the right subject?  Yes, it is.

Orson Welles is reported to have said, “The absence of limitations is the enemy of art”.  This lens has obvious limitations, and that’s okay.  Sometimes I want to isolate the subject completely.  Other times I want to include out-of-focus features as important compositional elements without distracting from the subject. In those cases, I reach for a different lens.  This lens can create impressionistic brushstrokes in backgrounds reminiscent of Renoir and Monet.  It is reasonably sharp in the middle, and the depth of field is quite narrow at short focal distances.

My disappointment in the lack of aperture has turned into a challenge to find the perfect subject for this lens.  I am sure it is out there somewhere.  I may have to channel 19th-century Parisian impressionist painters to realize this goal, but I will enjoy the journey.

Here are the basic specs, for the more technically-oriented: