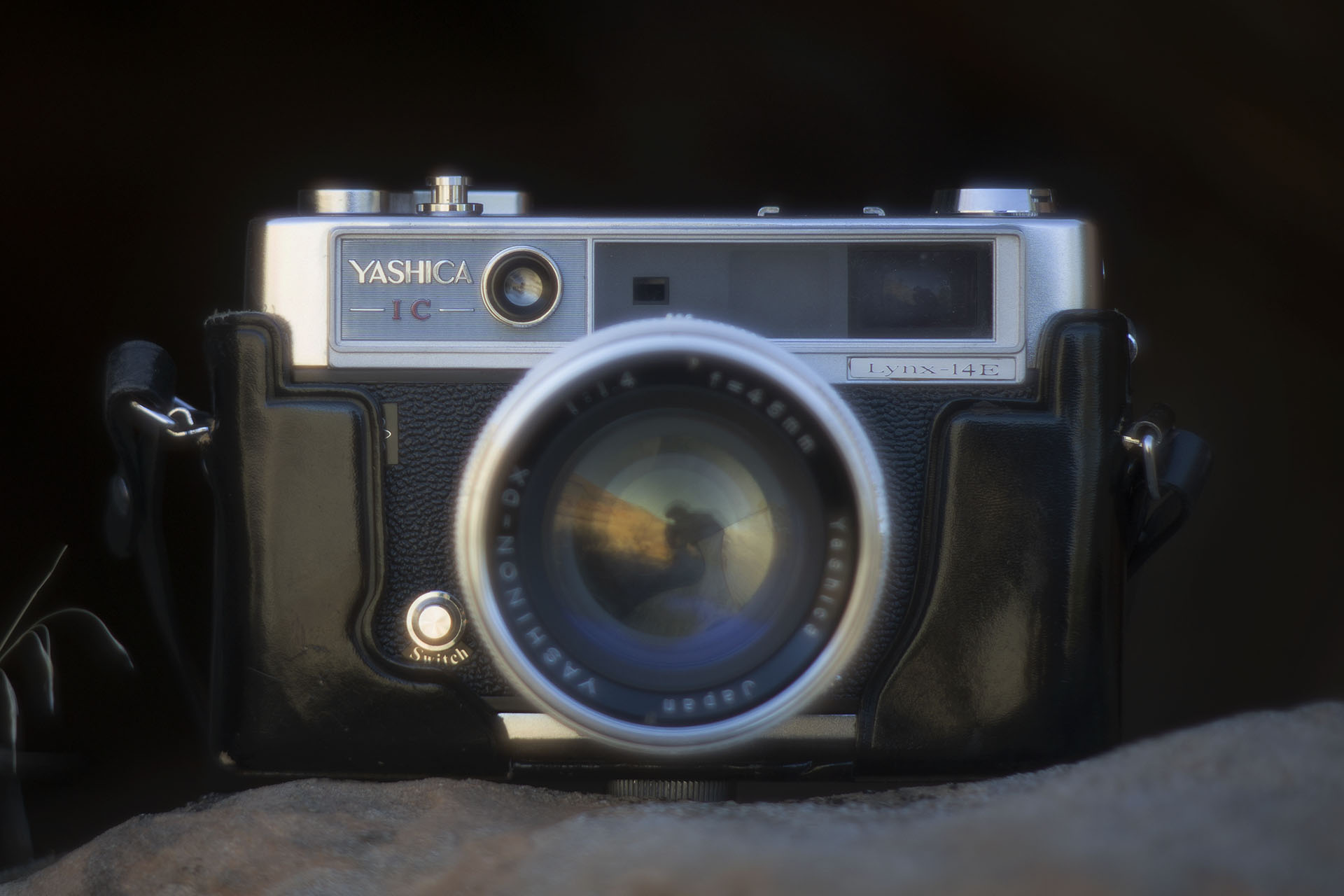 This was another generous gift from the owner of the last camera shop in town, as he retired and closed the doors.  It really is a thing of beauty.  During the film era I primarily used SLRs in 35mm, prioritizing ease of use, dependability, affordability, and image quality, and not necessarily in that order.  The type of photography in which I was engaged did not lend itself well to rangefinders.  In fact, for many years I didn’t own one that worked.  After the digital revolution, my temporary abandonment of film, and my subsequent return, I came to appreciate rangefinders more than ever.  Perhaps it is the nostalgic romance of a bygone era, the change to a different form factor or the pace that it requires, but lately I find myself reaching for a rangefinder more often.

The Yashica Lynx 14E is a large camera that announces itself with a bright chrome body and a very large matte chrome lens.  The “14E” designation is a reference to the 45mm f1.4 lens, a rarity on rangefinders.  Lenses on rangefinder cameras are typically smaller, but not this one.  It looks like an SLR lens on a 120 film body.  I’m not sure why they made the body so large, but it is proportionate to the lens and handles well.  I have wandered and hiked with the Lynx in its neveready case without complaint.  Most of the viewfinder and rangefinder cameras I have reviewed thus far have been quite compact.

I prefer reviewing a camera based on its user-experience and image quality rather than just technical specifications.  That said, aspects of the user experience can be inferred from certain specs and I try to list those for the more technically minded. They are as follows:

I have a feeling it had been sitting for quite some time before it fell into my hands.  The first few firings of the shutter seemed fine, but with continued exercise, oil started to migrate onto the blades and gum up the shutter.  I had to open the lens and shutter for a proper cleaning.  I was also able to get inside the top to clean the viewfinder and rangefinder optics.  They were not particularly dirty, but a little dust had accumulated over the years.  I don’t think it had been used much.  I’ve worked on a few Copal shutters, so there weren’t many mysteries to it.  I managed to put everything back where it belonged, and it came back to life.

I have learned not to trust exposure meters in older cameras until they have proven themselves.  I always carry a separate light meter (usually an old analog Sekonic) that I already know agrees with my film developing protocol.  If the shutter speeds are significantly off, I will know when I see the dry film.  I have used a wide range of shutter speeds on this camera so far, and they look spot on.  I have yet to use the Lynx’s CdS meter, so I cannot comment on its accuracy.  The meter requires long-discontinued mercury cells and I have not yet sought out the alkaline equivalent. There is a button on the front of the camera labeled “Switch” that activates the meter, and there is an over-under indicator in the viewfinder. The “IC” designation on the nameplate refers to Yashica’s first use of integrated circuitry in metering. The mechanical shutter operates independently of the meter, and does not rely on batteries. There are no auto-exposure modes. The film ASA is set on the aperture ring, and affects the meter reading as it should.

Build quality is solid and typical of many of the Japanese rangefinders of the time.  The top and bottom metal seems a bit thin to me, but that was probably a reasonable weight-related compromise. The winding mechanism has a fairly long, ratcheted throw.  One thing I would change is that the winding lever is so smooth and shaped in such a way that it sometimes slips from under my thumb and snaps back into place.  I try to be gentle and ease the winding levers down on all my older cameras to avoid any undue stress.  Another issue that took some getting used to is the aperture ring.  Since it has no detents, and moves freely, it is easy to inadvertently change the aperture while reaching for the focus ring.  The focus ring sits nearly flush with the body at the rear of the lens, and I have a habit of reaching for the middle of the lens to focus.  It slows me down even more when I have to double check the aperture after bumping it. I suppose that will work itself out in time, but I do wish that the aperture ring had detents to help prevent accidental exposure changes.

Forward of the aperture ring is the shutter speed ring, and it has detents.  It is convenient to be able to look down at the top of the lens and see the shutter speed, aperture, focal distance and depth of field scale all within a few cm of each other.  The M/X sync switch and the self-timer lever are on the bottom third of the lens barrel, and do not clutter the view from the top.

I love the optics.  There is something special about the rendering that I cannot yet define.  The bokeh is unobtrusive and pleasant.  No significant distortion has presented itself yet, despite having photographed several surfaces that would show it.  The subject is always wonderfully sharp, assuming I have done my part to properly focus and prevent motion blur.  The heavier body helps stabilize handheld shots.  I would love to put this lens on a good digital body. To my eye the contrast seems to be a bit higher than that of many older lenses, but that is easily adjusted in developing, printing and scanning.  Is the size and weight of the body a worthy tradeoff to have this great lens?  Definitely maybe.  In low-light situations, absolutely.  That’s where this camera would feel right at home.  If I am wandering through a state park with wide open vistas in the daytime, I would probably carry something with a wider focal length and could live with a smaller maximum aperture. It is great to have the f1.4 option when one needs it, but I honestly don’t need it that often.  That’s the practical me talking.  The soul of this camera is in the lens (all the body must do is hold the film flat).  There is something special about its character and rendering that I intend to investigate further.  I am confident that the more I use this camera, the more I will recognize scenes and subjects that beg for this lens.