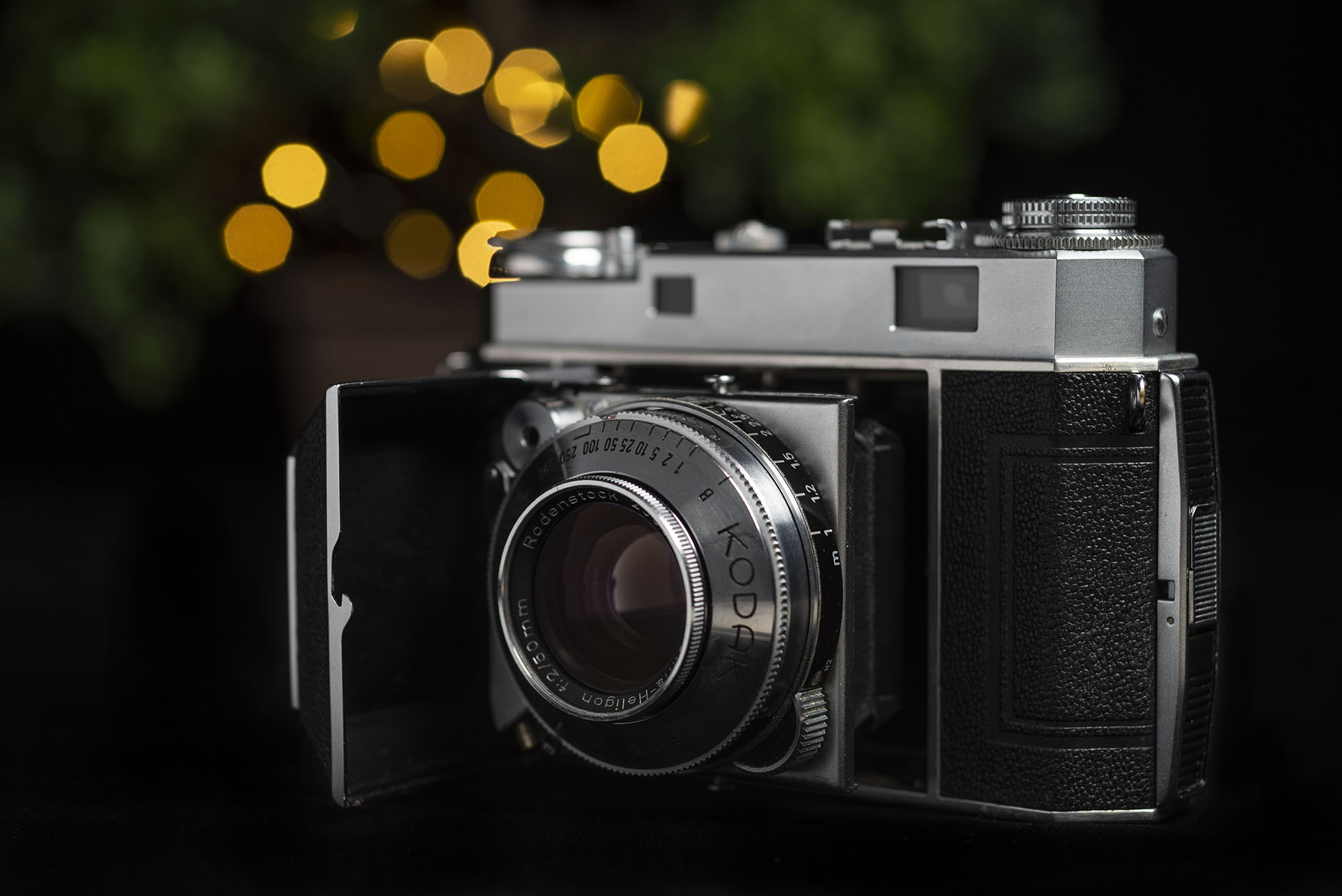 In the back of the glass display case in the local charity thrift store sat a small leather camera case that caught my attention.  Inside was the cleanest Kodak Retina IIa (Type 016) I have ever come across.  The price was acceptable, and I took it home.  The chrome was intact, the leatherette was intact, there was no indication of drop damage or misalignment anywhere.  The Rodenstock Heligon 50mm f2 lens was clean and clear of any damage or fungus.

Age takes its toll in one way or another, however.  A rim of minor haze was visible in the lens with bright light behind it.  The viewfinder/rangefinder optics were yellowed and dusty, and the slow shutter speed escapement was gummed up with decades-old lubricant and schmutz. That is perfectly typical for cameras of this vintage, and I wasn’t deterred.  After opening up the shutter mechanism and giving it a good solvent bath, things started to move correctly.  I properly lubricated the appropriate moving parts, and everything came to life once again.  The lens haze cleaned up nicely as well.

I consulted Chris Sherlock’s excellent youtube channel as I always do for Retina servicing.  I have always been grateful for those who share their extensive knowledge, and he is the undisputed king of the Kodak Retina.  Following his lead, I managed to get the top off, clean the optics and lubricate the gears.  After closing it back up, I found that I had a wonderfully compact, fully functional rangefinder camera with an f2 lens.

As I worked on the camera, I could detect the unmistakable smell of old leather, but with a hint of women’s perfume.  Earlier I had noticed some paper stuffed in the bottom of the case.  I pulled it out and unfolded it.  One piece of paper was the data sheet and exposure instructions for a roll of Kodachrome 64.  The other was a part of the Kodachrome 64 film box on which the expiration date of the film was still visible:  August 1975.  On the other side was the following handwritten note:  Louise – owner of Kodak Chrome.  My new old camera now has a name to match the perfume.  Perfect.

The distance scale (which is marked only in meters), the Rodenstock optics and the serial number seem to indicate that this camera was produced for sale in Europe, not for import into the US where I found it.  My research also turned up indications that this was probably built in the first half of 1951, before they switched to the Compur Synchro-MX shutter mechanism.

I own several post-war Retinas, and they are all very enjoyable to use.  The mechanics and haptics scream precision, the fit and finish are clearly the result of great attention to detail, and this all contributes to a very satisfying user experience.  A few quirks become evident, which I should probably mention.  Many Retina models have a manually set frame counter mechanism.  It is unlike more modern cameras which count from 1 to 36.  It must be manually set to the number of frames on the roll, (12,24,36) and it counts down.  Upon counting down to one, it locks the shutter and the advance lever, ostensibly to prevent tearing the film.  To those unfamiliar with this mechanism, it is easy to assume that the camera is jammed or broken.  Just turn the frame counter past the diamond-shaped mark on the dial and it will unlock and keep going.  This can be frustrating if one forgets to set the counter when loading the film.  The counter will lock the shutter and film advance lever in the middle of the roll, potentially causing a missed shot.  If the film runs out before the counter locks, the advance gears will likely tear the sprocket holes in the film.  Unless the film has been pulled completely free of the film cartridge, it can still be rewound, but there may be fragments of film floating around inside.

Another quirk worth noting is that the focus must be set to infinity to retract the lens and close the cover.  There are two buttons, one on top of the lens carriage, and one on bottom.  These buttons must be pushed to retract the lens.  If the focus is not set to infinity, the buttons are locked, and the lens cannot be retracted.  This allows for maximum compactness and prevents damage to the mechanism.

Two things happen when the shutter button is pressed.  Often there is a quiet click that occurs before the shutter opens.  It is the result of an arm dropping down and releasing the advance lever.  This can be mistaken for the shutter, which is also remarkably quiet.  This can be adjusted to occur later or nearly simultaneously with the shutter to prevent any confusion.  If the photographer is pressing the button all the way down, then it is unlikely to be a problem.

The location of controls is typical of the camera type and era.  Shutter speed and aperture are on the lens barrel where the leaf shutter mechanism resides.  No secrets there.  Top controls are in familiar places; the shutter release and film advance lever are on the top right side and the rewind knob is on the top left.  There is also a film reminder dial under the rewind knob.  This controls nothing, as there is no meter.  It is simply a reminder.  There is another small button between the shutter release and the film advance lever.  This button, when pressed, allows the user to advance the first few frames of a new roll of film without having to open the lens cover and actuate the shutter.  It does cock the shutter however, so it will be ready to take a photo when the lens is opened and extended.  The rewind button is located on the bottom as well as the tripod mount and the button that unlocks the lens cover.

My first outing with Louise resulted in a short roll of Ultrafine Xtreme 100 film being exposed.  As I was losing light in the evening, I was primarily shooting at f2 to f4.  I had left my shutter release cable at home and I didn’t want to waste any film on motion blur.  I had the excellent Aoka carbon fiber travel tripod which kept things steady enough, but I didn’t risk any speeds slower than 1/25.  Even wide open, I found this lens to be plenty sharp.  There is a detectable bit of swirl in the bokeh wide open, but it disappears when stopping down.  Image quality has a classic look to it, with unobtrusive bokeh.

Conclusion:  The Kodak Retina IIa Type 016 is a robust, compact, simple yet remarkably efficient piece of gear designed to give decades of service.  I find it fun to use, and the quirks I mentioned just become habit over time.  It’s all part of the fun of analog photography with old rangefinders.  If you want automated convenience, this is not your camera (in fact, you can probably just skip all of the mid-century German rangefinders).  The nostalgic romance of a folding camera, the feeling of handling a precision instrument, and the image quality make using this camera a satisfying experience.