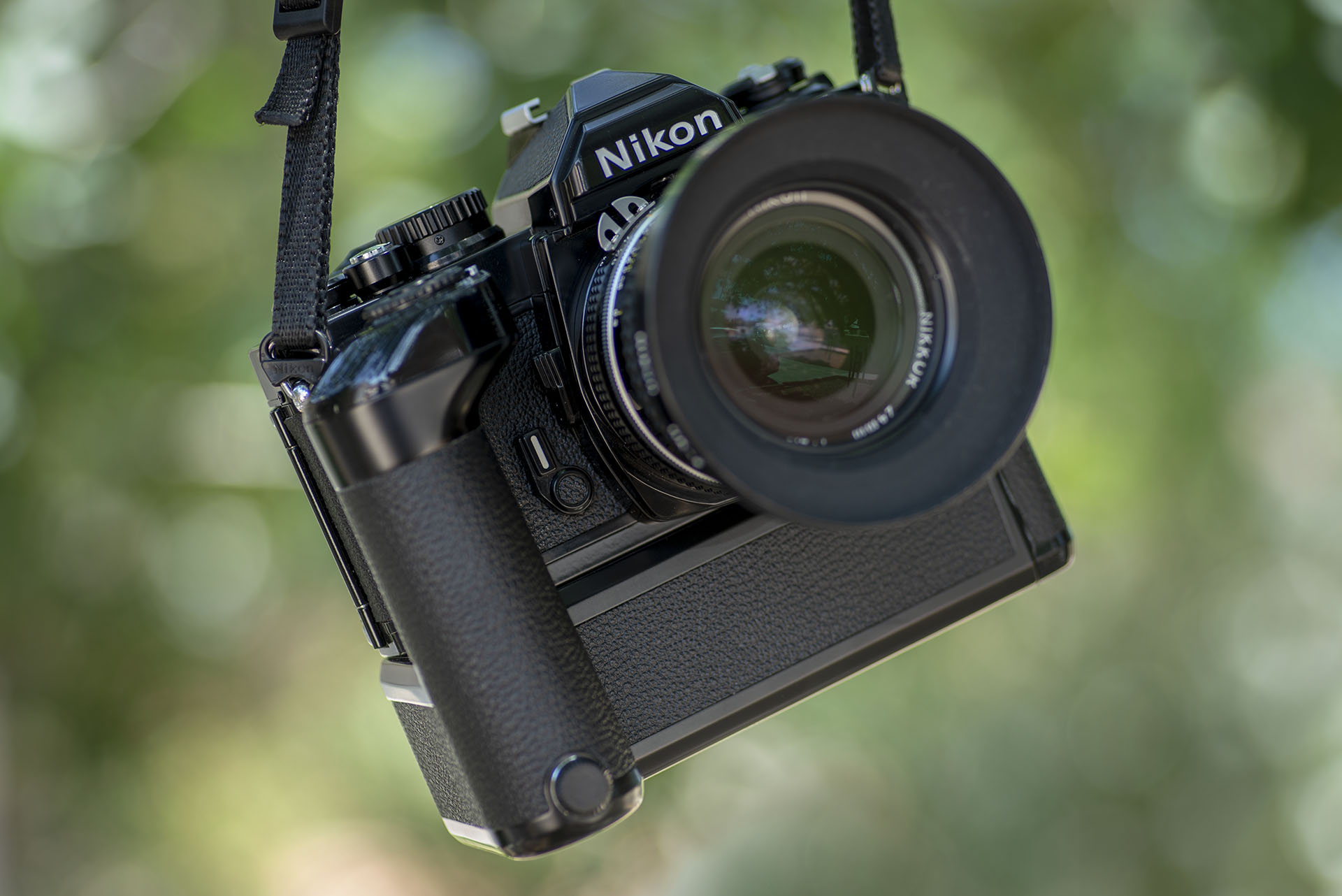 I have long had a respect for Nikon cameras, dating back to when I first started photographing seriously.  At the time I was so invested in the Minolta system that I simply could not afford to switch to a complete Nikon kit with all the lenses that I wanted.  After digital imaging took over the world, I was able to find the cameras and lenses I always wanted for remarkably low prices.

Cameras with purely mechanical workings have always fascinated me, whether SLRs or rangefinders. After having several cameras with electronic shutters fail in the past couple of years, I became hesitant to buy more.  I had a Nikon FE, and while I enjoyed it greatly, the electronic shutter became unreliable.  I passed that on to someone who had better electronic repair skills and waited for an FM to come along. The mechanical shutter, form factor and reputation of rugged reliability appealed to me.

It came along in the form of a very clean, black FM2n.  The clockwork of the mechanical shutter purred along like the day it was built.  Paired with used-but-unused MD-12 motor drive it became a formidable beast, emitting that unmistakeable sound.  The FM series was aimed at the advanced amateur to semi-pro market, but I knew several good professionals that used them.  The FM series had a reputation of being tough and reliable.  Also, being fully mechanical, the shutter did not rely on batteries.  (There is a battery compartment, but the batteries only supply power to the meter.)  I was frankly surprised to find one so clean, as the FMs used by my old pro friends were beat up and brassed.

The FM2n has a top shutter speed of 1/4000 second, which was pretty remarkable for that era.  Moreover, the flash sync shutter speed is 1/250th.  Those two improvements pushed the boundaries of a mechanical shutter, and even by today’s standards they are generous.  The high shutter speeds allowed shallow depth of field even in broad daylight with 100 ASA/ISO film, as well as the ability to freeze the motion of a fast-moving subject.  The higher flash sync speed allowed for greater control over balancing flash with ambient light in the studio or outdoors.

There are numerous reviews of the Nikon FM series, explaining the nuances of each successive version.  This one is designated the FM2n, the “n” indicating that it is the “new” version.  This is the first iteration of the FM2n, with the honeycomb titanium shutter that was in use prior to going to an aluminum shutter blade system.  Supposedly, the aluminum shutter blades worked better in very cold temperatures and were somewhat stronger.  I have never run across a failure that occurred due to the metallurgy of the blades, but there must have been a reason.

I enjoy the FM2n due to a few factors.  This is a very light and compact SLR, adding relatively little weight to my camera bag.  I like to carry a film body with my digital body, because some scenes simply beg to be shot on film.  Many modern Nikon DSLR bodies accept the old Ai and Ai-s lenses and allow for full-aperture metering.  This was the largest compelling factor that spurred my switch to a digital Nikon system.  I primarily use old lenses anyway, so most of my glass can do double duty on either digital or analog bodies.  I also like the basic metering system.  The indicators in the viewfinder simply consist of a plus sign, a zero and a minus sign.  Plus, as you might guess, indicates overexposure, minus indicates underexposure, and the zero denotes a correct exposure.  I also like having the shutter speed, aperture as well as the meter reading visible in the viewfinder.

Some claim that the FM2n frequently overexposes about a half stop due to its center-weighted metering system picking up too much sky in an image.  While I haven’t noticed that tendency, I often shoot slightly underexposed when there is an abundant sky in the image, or meter off a more neutral surface before composing the final image.  Another method of avoiding this is shooting when both the zero and the minus sign are lit, which usually results in 1/3 to 2/3 of a stop under what the meter considers optimal.  Of course, if more precise metering is required, one is likely to use a suitable hand-held meter.

Shutter:  Mechanical, vertical titanium blades, made by Copal and designed by Nikon

Attributes and features that make the user experience enjoyable matter to me.  Sometimes I will purchase a camera primarily for those factors, but sometimes I overlook inconvenient design details and just go for the nostalgic allure of a particular camera.  The FM2n is a very practical, easy-to-use SLR with very appealing features.  It can be a lightweight companion on a relaxing walk through town, but it is equally at home in a fashion shoot or soccer field rocking at 3.5fps with the MD-12 motor drive.  Many would prefer a more sophisticated in-camera metering system, but I honestly have not felt disadvantaged by the existing one.  Beginners and students can certainly learn to recognize and compensate for most lighting situations in which center-weighted metering can be compromised.  If in doubt about the lighting, one can still bracket a few shots and likely nail it, particularly with forgiving negative film.

I would highly recommend this camera (or any FM version) to a beginner or seasoned film aficionado.  Despite being all manual, it is easy to use.  The Nikon FM2n is also a precision instrument designed to give decades of service at any skill level.