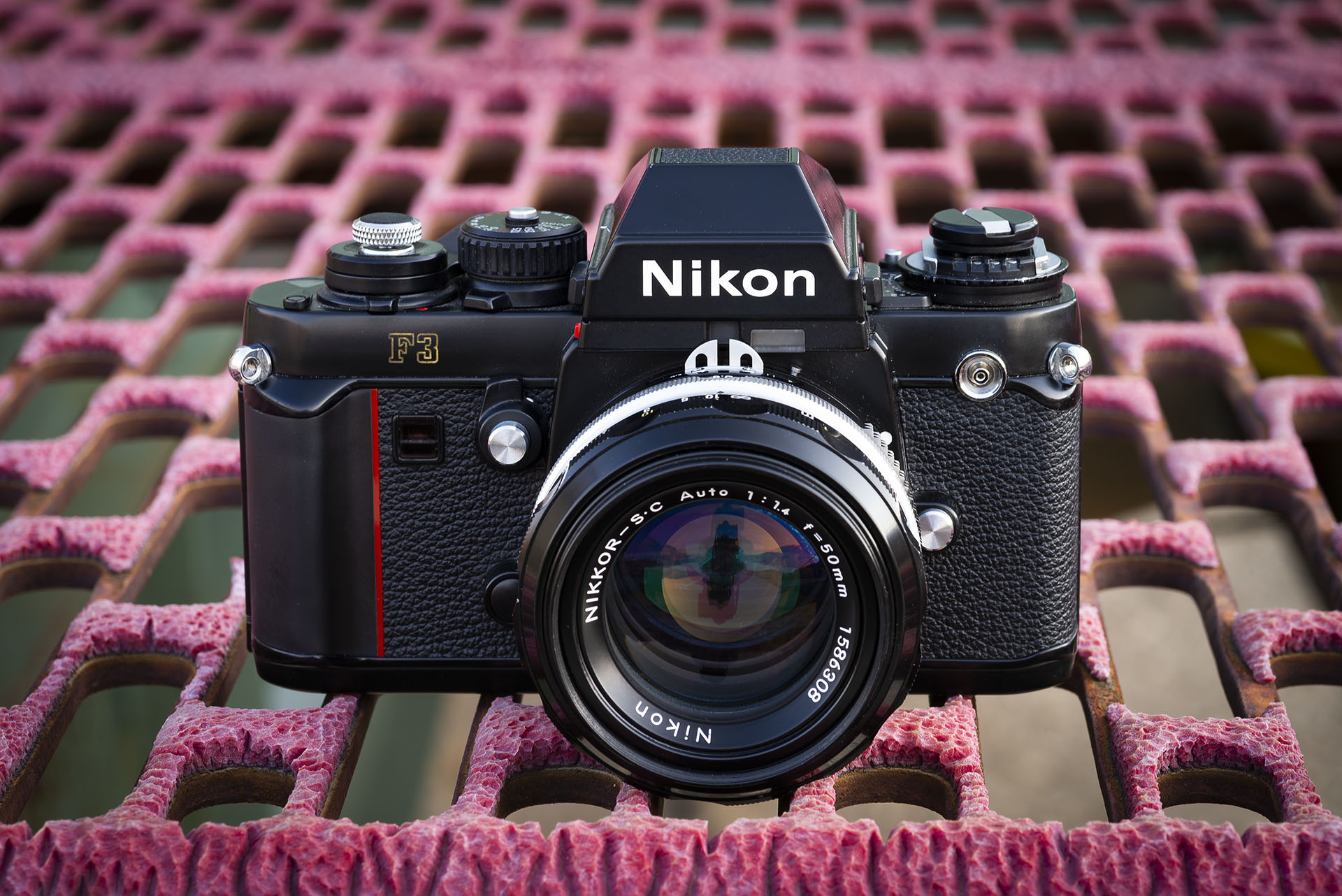 Yes, there is a pattern forming…I have previously written about the Nikon F and F2, and the F3 was sure to follow.  Introduced in 1980, the F3 followed several decades of pro camera dominance by Nikon.  It was continually produced for over two decades, and eventually became the professional’s choice.

Nikon’s new model incorporated some significant changes.  First, it had an electronically-controlled shutter, in contrast to the strictly mechanical shutters of the F and F2.  A novel 80/20 center-weighted metering system (for the first time located in the body rather than the prism) was a new feature.  Aperture-Priority mode was also introduced.  It was also visually quite different than its predecessors, having been designed by Giorgetto Giugiaro.  Signor Giugiaro was already famous for having designed supercars for many of the major Italian manufacturers, and brought a fresh, modern aesthetic.  The red stripe that became a Nikon signature was part of that design change.

The electronic shutter was met with mixed reactions—the old photojournalists were initially skeptical about the reliability of electronics.  Many held on to their F2s, trusting in the battle-proven design of the previous decade.  But, the F3 eventually proved itself worthy and assumed the throne.  It was lighter, sleeker, and functioned so smoothly that it won the hearts of many a grizzled old PJ.

Nikon did not abandon the popular modular philosophy.  The F3 also had interchangeable viewfinders (5), focusing screens (22), backs, and motor drives.  In fact, the F3 was built in more variations than the previous two generations.  These included the F3HP (High-Eyepoint), F3/T (Titanium), F3/H (High-speed), and F3AF (Auto-Focus).  While the different iterations of the F and F2 largely represented evolutionary improvements in metering, the variations of the F3 were distinctly purpose-driven to fill niche markets, such as eyeglass wearers (F3HP), light weight (F3/T), sports photography (F3/H) and the fledgling (1983) auto-focus market (F3AF).

The Nikon F3 also became the surrogate mother of digital photography.  In 1991 I had a photojournalist friend (we’ll call him Clint, because, well, that was his name) that acquired the first-generation digital back for an SLR, effectively converting his F3HP into a DSLR.  Kodak built the DCS-100 digital back, with a 1.3 megapixel sensor. The high quality and modular nature of the F3 system lent itself well to the development and adaptation of the digital back.  Tethered to a 200 megabyte Digital Storage Unit (DSU), it could store about 150 uncompressed images.  This marvelous machine retailed at about $20K.  That same year, I attended a pro photographer convention and trade show at which Kodak put on a fascinating yet terrifying half-day seminar about the future of digital imaging. The birth of digital photography was about to change everything.

I can understand why the F3 is still coveted today.  It is not particularly heavy, but still feels like a professional product.  The film advance lever rides on ball bearings and arguably results in the slickest action available.  It is so smooth, I find myself checking to make sure the film is actually advancing by watching the rewind spool.  I can’t tell there is film in the camera by the feel of the lever.  Batteries used by the F3 are cheap and common, and seem to last a long time.  There is 100% coverage in the viewfinder.  The aperture priority setting works very well, and has not failed me yet.

Is it the perfect SLR?  Maybe for some, but it has its shortcomings.  Most noted among its inherent flaws is the LCD exposure readout in the viewfinder.  It is small and prone to fade or bleed over time.  The designing engineers knew that it was difficult to see in low light, so they added a small light, actuated by a red button on the prism.  This light is also prone to fail.  I really don’t know how common this problem is, nor is there any failure on mine, but it seems to be talked about the most.  To be fair, I don’t believe the Nikon engineers of 1980 expected us to be complaining about it in 2021.  After all, we were supposed to be shooting holographic images from our flying cars by now.

Other potential inconveniences also exist, but depend on intended use.  Some users found the 1/80 second flash sync to be too slow, particularly for using fill-flash outdoors.  Some contemporary cameras had a sync speed up to 1/250 second.  Also, the F3 lacks a built-in hot shoe.  Much like the F and F2 before it, the F3 requires a separate accessory shoe that fits over the rewind lever and engages the electrical contacts on either side.  I suppose Nikon engineers determined that at the time, professionals didn’t utilize on-camera flash enough to warrant an integral hot shoe.  I personally don’t see this as a shortcoming, but just another option in a modular system.  Nikon engineers likely anticipated that professional photographers, for whom this camera was intended, would understand the modular nature of the F3, and choose the accessories that fit their personal needs.

This F3 often finds itself in my camera bag as a companion to my Nikon DSLR.  It seems to most often alternate with the FM2.  It has proven itself in the cold and heat of the high desert, and has yet to fail me.  I have tried to be as objective and forthcoming as I can about its pros and cons, but for me, the experience of shooting with an F3 is so positive that I intend to keep it until it decides to give up.