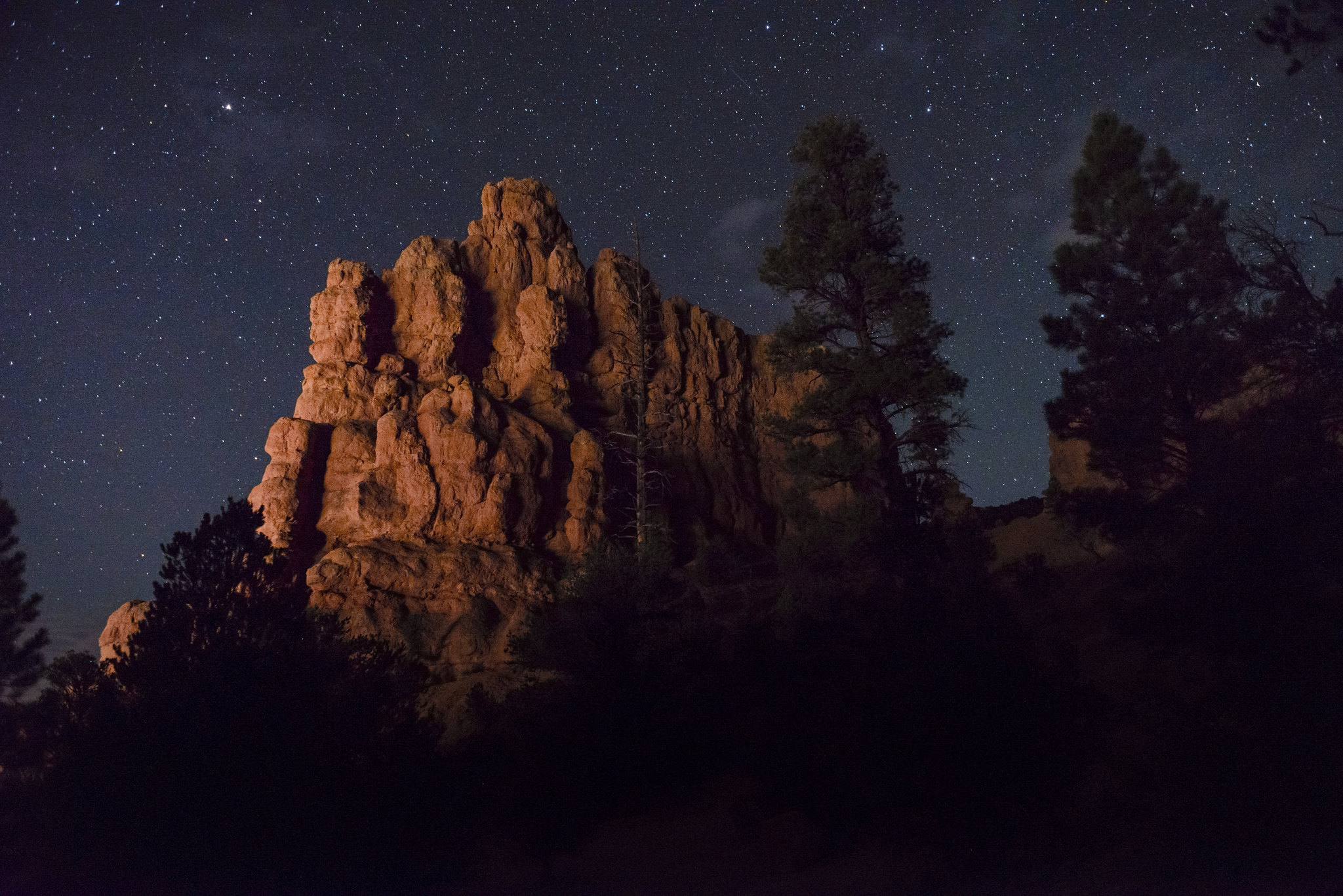 Many people just put their cameras away when the sun goes down.  They are sadly missing out on an exciting aspect of photography.  One does not need a giant fusion reactor burning in the sky to take a photo worth looking at.  In fact, not much light is needed at all.  Scenes that may look mundane during daylight hours can take on an entirely different personality at night.

Night photography in a city is different than in the country.  Cities offer glowing neon, storefronts, light trails, streetlights, and skylines.  Nighttime reflections of skylines on lakes, rivers and even puddles can be stunning.  In the country, small towns often shut down early and there is very little action in populated areas, except on special occasions.  Far away from cities, the night sky explodes with stars, and the Milky Way is visible as clusters and bands of stars streaking through space.  Very little of this is visible in and around a city, due to light pollution.  Some cities and towns are trying to preserve night sky visibility by passing initiatives that restrict excessive nighttime lighting.

Certain events draw avid photographers out at night.  Festivals and holidays with fireworks are always fun to explore for photo opportunities.  Carnivals are also a challenging subject, with so much movement.  Meteor showers occur predictably throughout the year, offering the chance to catch a falling star, at least on film or a sensor.  Occasionally a comet will present itself and offer a unique opportunity.

Nighttime photography is a bit of a different game, often requiring longer shutter speeds, higher ISOs, fast lenses and tripods.  I cannot stress enough the importance of getting a good, sturdy tripod for working at night.  You will not be shooting anything hand-held unless you are deliberately going for motion blur.  There are many tripod options out there, with several tiers of quality and price.  Besides stability, weight becomes an issue if you will be carrying it long distances.  There are some lightweight tripods that are remarkably stable, but come at a greater cost.

Finding the proper exposure can be a balancing act, with several factors in play.  With a digital camera, it is easy to take test shots and keep adjusting until the image looks right.  Watch the histogram for blown-out highlights. Plan on losing shadow detail in unimportant areas of the image. Movement in the scene will often be another deciding factor for establishing the proper shutter speed, whether freezing the motion or allowing the motion to be recorded.  Trails from car headlights and taillights in a city setting can take long exposures.  Stars in the night sky can either be exposed to appear as points of light or star trails, which record the relative movement of the stars through the sky as arcs of light.  Lightning photography relies on luck and timing, but is very different than starscapes. Explore the creative possibilities of changing shutter speeds, apertures and white balances to develop the mood of the image.

For Milky Way photography, I use a wide prime lens, most often a manual-focus Nikkor 24mm f2.8.  Even when using an autofocus lens, I have to turn it off and focus manually, so there is no disadvantage to starting with a MF lens.  When possible, zoom in on a live-view image, with the lens wide open, to set the focus on a single star. Don’t rely on the lens to offer you an accurate infinity stop. I use the lowest ISO that allows me to use the shortest exposure time and still get a reasonably exposed image.  Most of the time I do not want stars to trail.  At some point, somebody came up with what is known as the “500 Rule”.  This is a formula designed to calculate the optimal shutter speed to prevent star trails.  The formula is as follows:  500 / (Crop-Factor x Focal Length) = Ideal Shutter Speed.

This formula is widely published, but does not work for me or anyone I know.  I only repeat it with the following advice:  Use it as a starting point for experimentation-not as an absolute truth.  Using this formula for my Nikkor 24mm on a full-frame camera:  500/(1×24)=21 seconds.  At that shutter speed I have unmistakeable and distracting star trails.  I try to keep my shutter speed around 12-15 seconds at most.  My typical sweet spot with the 24mm is 15 seconds at f4 and ISO 2000.  This allows me to bring out the texture and colors of the Galactic Center.  I stop down to f4 just to tighten up sharpness and minimize any optical aberrations.  Experiment with your gear to find the right balance.  You’ve got all night.  I hope you brought snacks and drinks.

Lightning photography, while it also involves light in the night sky, is a different beast altogether.  My go-to exposure is longer (20-30 seconds) at lower ISO (100) and smaller aperture (f11).  Lightning is extremely bright, momentarily generating temperatures up to several times the temperature of the surface of the sun.  Believe me, you can stop that lens down a bit and not miss anything.  I often adjust my shutter speed based on the brightness of any foreground features such as city lights.  The shutter speed has no effect on the image made by the actual lightning bolt, other than longer exposures can record multiple strikes.  Again, it’s a balancing act.  I like lower ISOs as they allow me to keep the shutter open longer.  Even at f11, the area around the actual lightning strike is adequately lit (unless hidden by rain or clouds).  Lens choice depends on my distance from the storm.  I usually operate with a 24mm, 50mm or 100mm.

I prefer to scout locations for photographing thunderstorms in advance.  When I see an electrical storm brewing, I already know which location would likely give me the best vantage point from which to shoot. This saves the time and hassle of looking for a spot to set up.  Sometimes it is simply raining too hard or the wind is blowing too much to make it worth the effort.  Desert monsoons like the summer storms we get in the Southwest US often kick up some wicked dust in the windy fronts ahead of the rain.  This creates a very unfriendly environment for cameras and nice optics.  I carry a small packable microfiber camp towel in each camera bag to clean and protect my gear.  Sometimes I just sit in the truck and watch the show, never risking my gear to the elements.  I feel that personal safety should be addressed here as well…remember that you are located on an elevated vantage point holding a metal tripod in a lightning storm.  Hey, I never said it was a smart thing to do.  Sometimes the secret to successfully shooting lightning is knowing when to leave.  Manage your risk intelligently.

Fireworks and city lights vary in intensity, and usually require a few test shots to nail exposure.  Shutter speed and aperture should be balanced to get the desired depth of field and include whatever movement or features you are trying to capture.  In-camera metering often gets confused in these scenarios, so using established exposures for starting points is advisable.  One approach is to go through some Flickr searches and look at the exposure data for shots like the ones you are going after.  Hints:  I get the best fireworks images during the slower parts of the show with longer exposures.  Photographing the “grand finale” of a fireworks show in one shot often ends in a blown-out disaster, if I use the same exposure as the rest of the show.  For nighttime cityscapes, consider going out right after a good rain.  Your images will be entirely different with city lights reflecting off the wet ground.

I try to use as much ambient lighting as possible, keeping the image as natural as I can.  Sometimes there simply isn’t enough light in the right places, so I bring my own. Never underestimate the power of a silhouette, but sometimes it just doesn’t work. If the image calls for lighting the foreground, simple light-painting techniques can work wonders with long exposures. Shine a light on the chosen foreground features with the shutter open. Changing the position of the light source can soften shadow edges, resulting in a different mood. I usually try to balance the color temperature of my light source with the existing ambient light, unless I am going for a different effect.  Colored gels over flash or continuous lights can accomplish this, and more modern LED lights’ color can be controlled.  Color affects the mood of the image, so experiment.  Shooting in RAW allows for the maximum versatility in color management in post-production.

There’s a myriad of post-production software-based options such as image stacking for getting maximum depth of field, or Milky Way texture and color, and high-ISO noise reduction.  I have had moderate luck experimenting with these options, but I prefer to get the image as correct as possible in camera at the time of exposure.  This is, of course, where I find digital imaging vastly easier than film.

I have realized a few things as I have been chasing these images. Scouting out locations well ahead of time in daylight is important. On one of these Joshua tree night shoots, I had failed to scout the location early. The whole night was a learning experience, with no successful images to show for it. First of all, I discovered that I was standing in an ant pile and unintentionally learned a new dance. Second, working out my composition in the dark meant shooting many images and making adjustments incrementally. I walked away that night with nothing I liked. I came back in the daytime, found my compositional elements, and built a small rock cairn exactly where I wanted the tripod. Marking the location on a GPS allowed me to drive right back to the spot at night without wasting time searching. Third, bring a small flashlight or headlamp, preferably with a red light option. The red light allows me to see tripod and camera controls without wrecking my night vision. Toss one in your camera bag, and it will always be there when you need it.

Regardless of your location, there are subjects that will look completely different at night, and often more interesting. With a little planning and preparation, nighttime photography can open up a new level of photo inspiration and add interesting images to your body of work. Don’t put the camera away just because the sun went down.