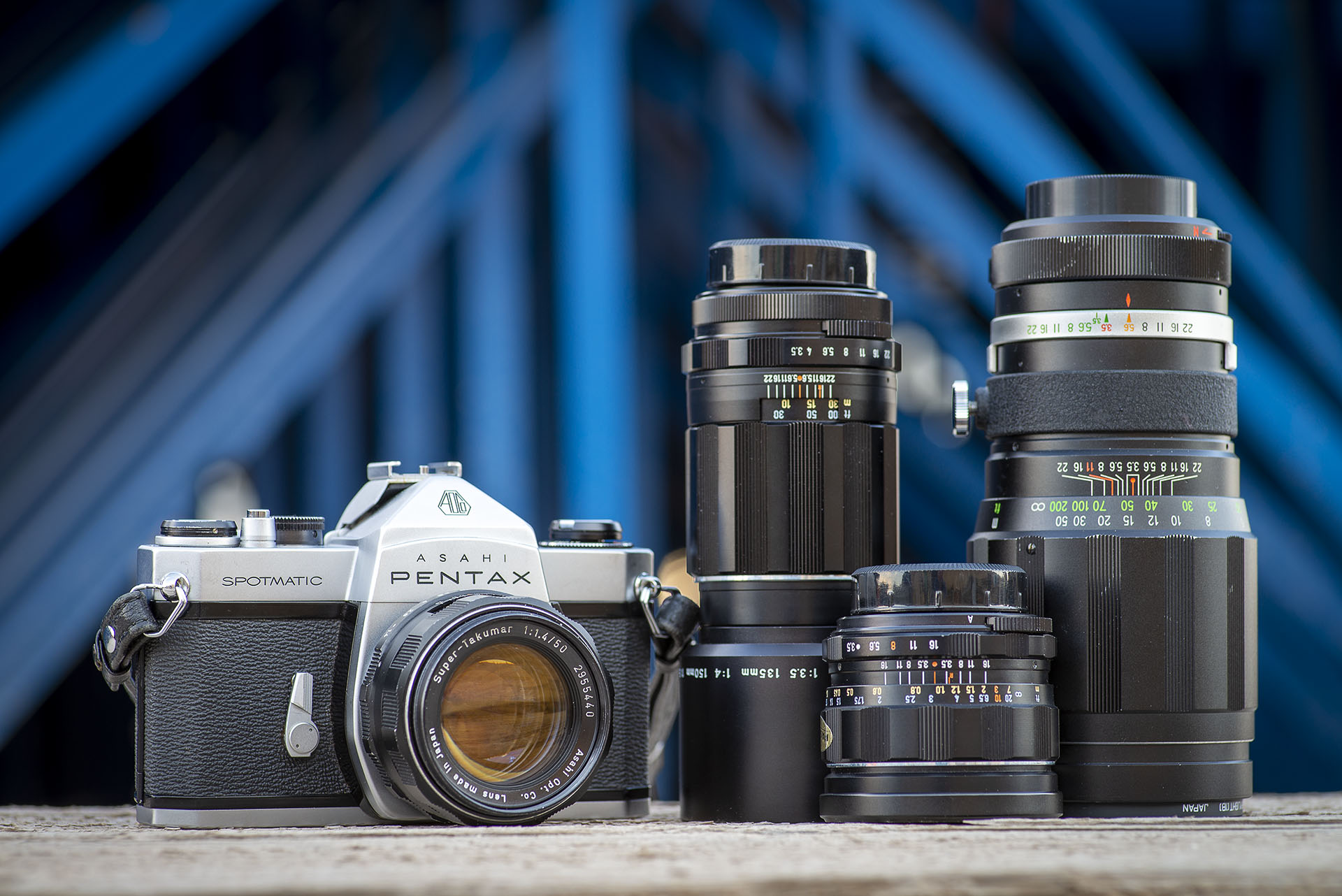 In a previous review of the screw-mount Soligor (Tokina) 200mm f3.5 lens, I related the story of how it found its way to my collection.  My local camera store was closing, and the owner (who I had known for some time) gave me boxes of miscellaneous gear that he had accumulated over the years.  Among those boxes were the Soligor 200mm and a Super-Takumar 50mm f1.4 (also previously reviewed). The only M42 body I had was an old Zenit I had purchased in La Coruña, Spain sometime in 1988, and it was in questionable condition.  I started thinking of acquiring a Pentax M42 body, and the Spotmatic series seemed to be calling to me.

During my half-hearted search for an M42 body, I wandered into a charitable organization’s thrift shop.  Okay, they might be upset if I called it a thrift shop—It was a thrift boutique.  This particular store was the second of two stores, and it only carried the finer donated merchandise like furniture, home decor, kitchenware and the like.  I noticed a fabric tote in the back of a glass case, containing miscellaneous camera gear, and asked to have a peek at it.  The lady behind the counter said, “Look, I told the girls at the other store never to send me cameras, and I want this out of here.  I’m tired of looking at it!  If you are interested, give me ten bucks and take it all.”

Well, I gave her ten bucks and took it all.  Among the items in the tote were a pristine and functional Yashica J rangefinder 35mm camera with case, two Super-Takumar lenses in cases (a 28mm f3.5 and a 135mm f3.5, both immaculate), three flash units (a Vivitar 283 and a couple of Morris slaves), some flash color filters, and other miscellaneous accessories. I refrained from grinning too widely until I had exited the store.

This event left me with a total of five M42 lenses, namely a 28mm Super-Tak, 50mm Super-Tak, 58mm Helios, 135mm Super-Tak and a 200mm Soligor, and no M42 body worthy of them.  My search for a proper Spotmatic intensified.  I found a nice one a couple of weeks later, advertised in the classified ads of an online photographic forum I frequently visit. I purchased it and completed the kit.  It only required light seals and a little exercise to return to full functionality.

The Spotmatic SP was introduced in 1964, early in the evolution of SLRs.  It was the first Pentax SLR with TTL (through-the-lens) metering.  There is a switch that both closes the aperture to the set f-stop and simultaneously activates the meter, a system known as stopped-down metering.  One composes the photograph, pushes the switch up, adjusts the aperture or shutter speed until the match-needle meter reads the scene to be correctly exposed, then the presses the shutter release to take the photo.  The shutter resets the meter switch and opens the aperture back up.  It’s a slower process compared to later cameras with full-aperture metering, but I am accustomed to using a trusted hand-held meter, particularly with older cameras.  When metering separately, I don’t need to mess with the switch.  I just meter, focus and shoot.

Shutter sounds vary greatly between different cameras.  The Spotmatic has a relatively loud but sweetly mechanically-sounding shutter.  Despite the noise, I can feel little shake as a result of all the movement going on inside the camera.  The internal parts must be as nicely fit and finished as the external parts.  Nothing rattles or makes unexpected noises.  The weight is significant, but contributes to stability. The aesthetics of the Spotmatic have a classic charm and represent the elegance of a bygone era of camera manufacturing.

There is no shortage of published information on the Spotmatic series, as 4 million were produced, and many of them are being dusted off and put back in service.  It has an almost cult-like following now, and I am not surprised.  The legendary and radioactive Super-Tak 50mm f1.4 was the lens typically shipped with the camera and together they make a beautiful couple.  I had never really considered the Spotmatic, or any other M42 system seriously until these lenses showed up begging to be put to work again.  I was happy to oblige.

PX400 batteries were banned due to the toxicity of mercury.  The only suitable 1.35v replacement that materialized is a zinc-air battery that has a relatively short lifespan.  There is, however, some built-in flexibility as the Spotmatics have a bridge circuit that allows higher voltage batteries to be used without negatively affecting the meter reading.  There are also adapters available that allow the use of readily available 1.5v batteries and reduce the voltage appropriately.  Currently I have installed a smaller SR41 (1.55v silver oxide) button battery with an o-ring around it to maintain proper spacing, and it works fine.

I could write a “Pros and Cons” list, but I often find those irrelevant, particularly when reviewing old gear.  Features like stopped-down metering, slow screw mount lenses, obsolete battery and the absence of a hot shoe can be considered disadvantages if one is comparing the Spotmatic to a more modern camera.  When I pick up the Spotmatic, or a Nikon F, or a Leica IIIf, I step back in time.  I don’t complain about the lack of more modern features. These are not modern cameras.  If all I wanted in my cameras were convenience and speed, I wouldn’t bother with the Spotmatic, or any dinosaur SLR, rangefinder, twin lens reflex, medium or large format camera. I wouldn’t bother with film cameras at all.  My iPhone is the fastest and most convenient camera I own, but I don’t enjoy the process. These cameras are for people who actually enjoy the quirks and antiquated features. If you’re reading this blog, I assume you’re that type of person, too.