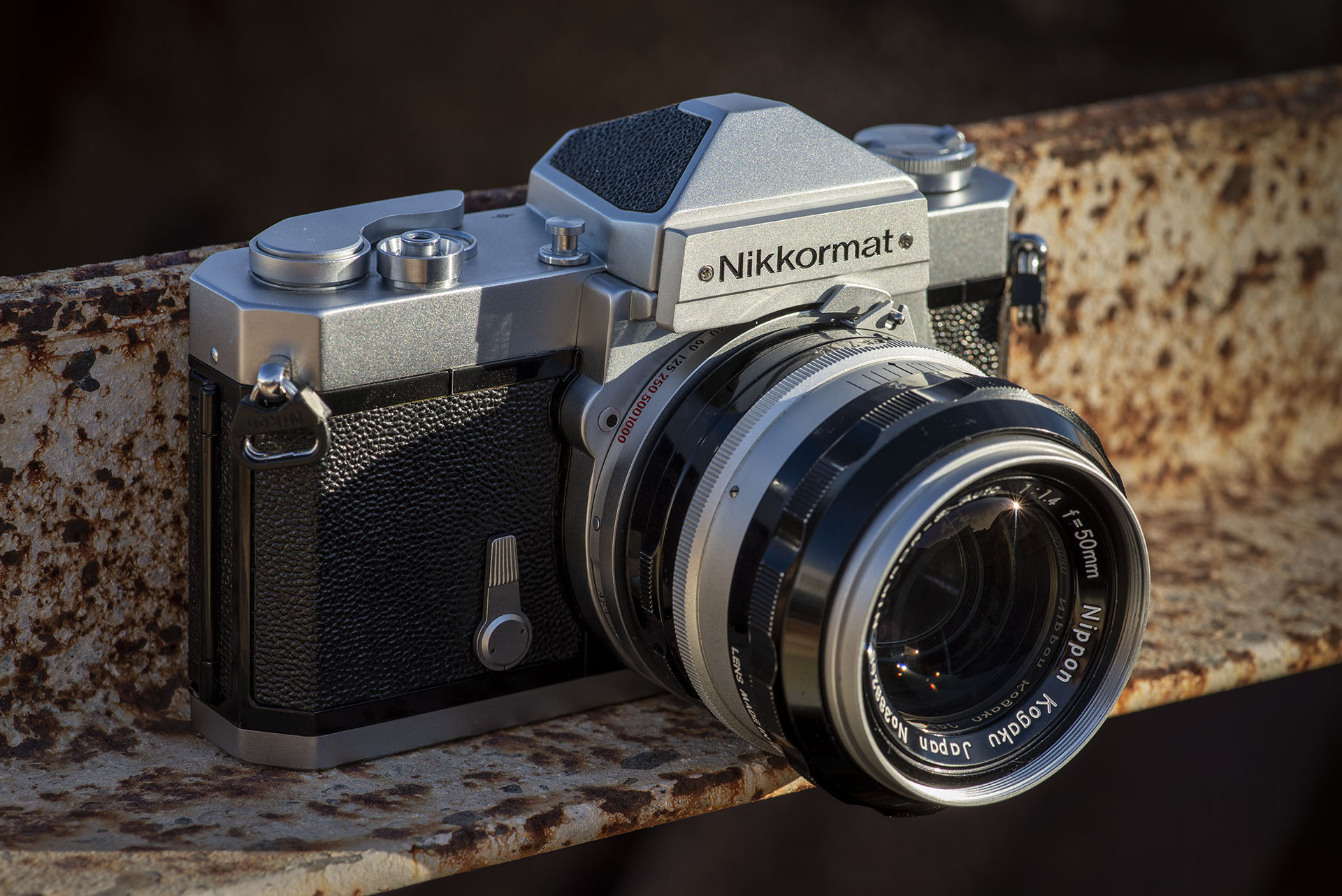 Some time last summer, I was passing though a small town in Southern Utah and stopped in at an antique store. I was, as usual, also trawling for old photographic gear.  I asked the shopkeeper to see all of her cameras, and found a chrome Nikkormat body with a pre-ai Micro-Nikkor 55/3.5 attached, with a 135/2.8 in a case.  I considered it but the price seemed a bit too high for the kit.  The lenses were frozen up from disuse and old lube, but the body seemed to be functioning fine with no major issues.  I decided to pass on it, and regretted it for the next couple of months.

I had another opportunity to return to the town, and decided to go ahead and get it.  I called ahead of time, and the shopkeeper set it aside for me.  However, upon arriving, I discovered that during the course of my slow decision-making process, somebody had dropped the camera, caving in a corner of the body and mashing the filter ring of the lens.  The shutter still opened, but the mirror locked up and would not return.  My disappointment must have been palpable, or maybe I said something, because on the return trip home, my wife suggested I go ahead and get one somewhere else.  The search began.

I managed to find one online with a reasonable price and a return option.  The seller stated that the light seals had been replaced where needed and it was fully functional.  When it arrived I discovered that it was not quite as advertised, but I was able to get it working properly after a little troubleshooting and cleanup.  The film door seals needed replacing as well, but that was not a problem.

The Nikkormat series began in 1965, and eight models were produced until 1977 when the FM and FE series came along.  They were intended to to be a more budget-friendly consumer option to the Nikon F, which was a modular, professional system.  The Nikkormat is not as modular.  There are no provisions for interchangeable backs, prisms, focusing screens, or other pro-oriented options.  It is a simple yet robust camera, capable of taking a beating right along side of the F and F2.  For quality-minded enthusiasts, it also represented a more economical route to using high-quality Nikkor lenses.

Nikon’s Nikkormat FTn was the third and most common of eight models in the Nikkormat series.  It was introduced in 1967 and produced until 1975.  Gradual improvements were introduced with new models, including lens aperture indexing, metering, hot shoes, and electronically-timed shutters. The evolutionary improvements that appeared in the FTn include a 60/40 center-weighted meter, simplified lens aperture indexing, and brighter focusing screens.  A flash shoe was also available, but it was a cold shoe that mounted to the top of the prism and held in place by a ring around the viewfinder window.   Hot shoes would appear later in the evolution of the series.  There are two PC sockets for flash sync on the left side of the camera top.  One is labeled “M” for flash bulbs (with inherent delay) and the other “X” for electronic flash.  Connecting an electronic flash to the M setting will cause the flash to fire prematurely, and it will fail to properly light the scene while the shutter is fully open.

Mounting a lens properly is less than intuitive for the uninitiated.  First, the indexing pin protruding from the front of the prism must be pushed all the way clockwise to the right, (facing the camera). The lens’ aperture must be set to f5.6, and the bayonet mount will engage with the pin seated in the rabbit ears.  You twist the lens on counterclockwise until the lock engages, then you do the “Nikon shuffle”.

The Nikon shuffle became a subconscious operation for the pros that used the F and F2 models with metered prisms.  It is also necessary on the FTn.  Upon mounting a lens, the aperture ring must be turned to both extremes of the aperture range.  This communicates the maximum aperture of the particular lens to the meter.  Of course, it only works if the indexing pin is seated squarely in the notch between the “rabbit ears” on the aperture ring.   Upon turning the ring, there is an audible click in the indexing mechanism and a tiny red mark appears on a scale on the left front side of the lens mount indicating the maximum aperture of the lens.  This was not working on mine.  I discovered that there were two frozen pivots under the nameplate that were preventing the indexing from taking place.  A little solvent dissolved the old lubricant and new oil got it moving again.

Controls on the FTn are a bit different than many cameras of the era.  First, the shutter speed dial is located around the lens mount, rather than the camera top.  There is a tab protruding from the shutter speed ring that allows the shooter to rotate the dial and change the speed without taking the eye away from the viewfinder, or removing the finger from the shutter release.  This was a feature later discontinued in the Nikon line but used by Olympus.  I wasn’t sure how I’d feel about it, but after getting used to it I find it useful.  The shutter speed is visible in the viewfinder, and adjusting the exposure becomes very easy.  There is also a button between the prism and shutter release that actuates the aperture for previewing the depth of field.  It simply closes the aperture without firing the shutter.  On the left side of the lens mount there is a sliding switch that locks the mirror up.  This allows the shooter to minimize mirror slap which sometimes induces motion blur.  This is particularly useful with telephoto lenses when mounted on a tripod.  Compose the image, adjust the exposure, lock the mirror up, and release the shutter either using the normal button or the self-timer for additional stability.  The shutter release button is also threaded for a cable release.  Located on the camera front below the shutter release is the self-timer.  On the bottom of the lens mount there is a sliding control to set the ASA of the film.

Some features that appeared in the FTn represented improvements even over the professional “F” series bodies.  The mirror lockup switch on the F requires the shutter to be fired, resulting in a blank or wasted frame.  This is not the case with the Nikkormat FTn.  Also, the flash sync speed is 1/125th of a second, a full stop faster than the F.  Photographers who frequently used flash found this useful when mixing fill flash with ambient light, as it allowed greater control.  This may have been one of the reasons the Nikkormat found its way into more than a few pros’ bags as a backup.  Moreover, The FTn has full TTL metering capability even with a compact prism and viewfinder.

Overall, the quality of the Nikkormat is pure Nikon despite the different name.  Nikkormat FTns are heavy, fully mechanical cameras and many are still in service.  They are underrated and underpriced as a result.  They were built to last, during an era of rapid advances in camera design but with a proud commitment to quality and longevity.  Among the phrases used to describe this series are “built like a tank” and “bulletproof”, and those descriptions are not unfounded.  This is a serious camera built for decades of serious use.  Since it was aimed at the consumer market, many were not used professionally.  Unsurprisingly, there are still many that look practically new, having sat in closets for most of their lives and never used for anything more than a few trips to Disneyland.  For many families, a typical roll of film had a Christmas tree at each end and a summer vacation in the middle.

The battery for the meter is the discontinued PX625 1.35v mercury button battery, but there are workarounds that allow for meter use. I currently am using the 625a 1.5v alkaline battery, and so far it is showing exposures that match my other meters.  As the alkaline battery ages, the voltage drops more gradually than the mercury cell, and will likely result in missed exposures if I rely on it.  I usually meter with a trusted handheld meter or my phone app anyway, and don’t expect absolute reliability from a very old in-camera meter.  The meter reading is visible in the viewfinder as well as the left side of the camera top.

My experience with the Nikkormat so far has been very positive.  Barring catastrophic damage, all of the mechanical shutter Nikkormats that have passed through my hands have been fully functional.  The shutter is quieter than my Nikon F and F2 models.  I’m not bothered by the quirkiness of the Nikon shuffle or the location of the shutter speed dial.  It feels good in the hand, with a reassuring heft and resulting stability.  There is an industrial, almost brutal elegance about it.  Although appearing austere and spartan, there is a perfection in the mechanics that makes if feel luxurious. I believe this was the defining characteristic of Nikon cameras of that era.