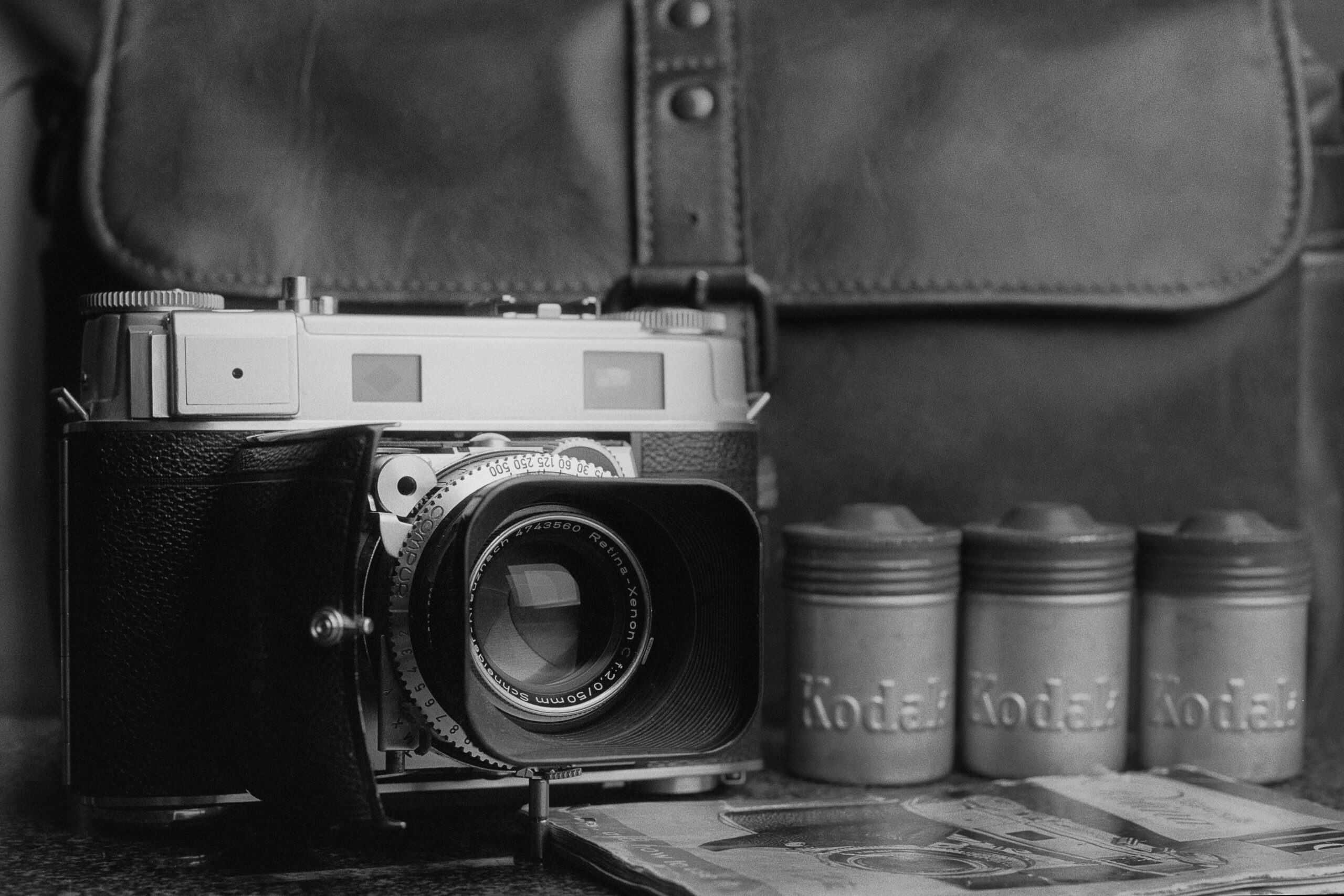 Every once in a while I have to take this one out to play.  When I do, I am reminded of the personal craftsmanship and mechanical precision that once dominated camera manufacture.   Old photos of camera factories show row upon row of actual humans carefully inspecting and assembling cameras and lenses.  While disassembling these old cameras to clean and repair them, I often find initials, dates, and hand-written reference numbers.  It reminds me of the way things used to be.  Even internal parts of certain makes of cameras are nicely finished, polished, and hand-fitted to ensure perfect function for decades to come.  Today’s cameras and lenses are far more advanced, refined and complex, but somehow, at a least for me, lack the same sense of soul.

Kodak Retinas were manufactured in the Nagel camera factory in Germany.  They were made to exacting tolerances and were intended to give Leica and Zeiss a bit of competition.  While the Kodak name is often associated with inexpensive point-and-shoots and Instamatics, the Retina line was very high quality, outfitted with beautiful optics, and certainly not cheap.  When I see one for sale in a local shop, I usually have to get it.

This one came from a local antique dealer and was in need of a typical shutter mechanism cleaning.  As with my other Retinas, it was easy to work on and came back to life with a minimum of fussing and cussing.  Nearly any camera this old will have had some degradation, particularly in lubricants that turn to gum over time.  Grime and schmutz accumulate with or without regular use and must be cleaned out to return the machine to its former glory.  Fortunately, there are instructional resources online that allow even me, a ham-fisted troglodyte, to confidently disassemble and clean these old gems.

Introduced in 1954, the IIIc was the most expensive Retina rangefinder to date, and was packed with features.  One significant change included in this model was a newly designed support mechanism for the lens and shutter.  In previous models, the hinged door served as the support structure, but in the IIIc the shutter is supported by the body and simply slides out when the door is opened.  This was likely done to increase rigidity, preventing alignment problems.  Optically there was also an upgrade from an f2.8 lens to f2.0.

There are several quirks worth noting, and none of them bad.  First, the film wind lever is on the bottom of the camera.  This takes a little getting used to, but it becomes natural after a while.  Second, the lens focus must be set to infinity in order to retract the lens and close the door.  There are two buttons, one on top and one on the bottom of the lens carriage, and they must be pressed to retract the lens.  They are blocked if the focus is set to anything but infinity.  This ensures maximum compactness and prevents damage to the lens and focus mechanism.

Next in the line of quirks is the EV exposure system that couples the shutter speed and the aperture ring.  The built-in light meter has a match-needle system that presents the reading as “EV”, or Exposure Value.  Each EV has a corresponding set of shutter speed/aperture combinations that provides the same exposure.  For example, a reading of EV12 would be exposed at 1/125 at f5.6, or 1/60 at f8, or 1/30 at f11, and so on.  The photographer reads the EV with the meter, then sets the EV ring on the shutter to the indicated value.  Upon turning the shutter speed ring, the aperture dial turns as well, keeping the same exposure value.  One can choose the appropriate setting based on needed shutter speed or preference for depth-of-field.  One can still change either independently by applying a little pressure to the aperture control tab while turning either ring.  This unlocks the link between the rings.  It’s a little awkward at first, but once I became conscious of it, I didn’t have a problem.

While we are discussing quirks, I should probably mention the film counter mechanism.  More modern cameras have a frame counter that automatically resets when the back is opened and counts up from 1 to 36.  This Retina has a manually set counter that counts down, then locks the film advance.  On the camera top next to the frame counter there is a button with a shroud that prevents unwanted activation.  On the back of the camera top there is a sliding button marked with an arrow pointing right.  One presses the top button while sliding the rear button, and this unlocks and advances the frame counter.  I do this after advancing the first few frames of a roll.  I advance the counter to the number of frames available on the roll, and it counts down as I shoot.  It also locks when it reaches 0, even though there may remaining film.  I can only assume that this is to prevent damage to the film upon reaching the end of the roll.  Pushing the button unlocks the advance and allows the user to continue shooting and carefully advancing the film if possible.  It will tear the sprocket holes if too much force is applied to the lever at the end of the roll.

An unusual option for this camera was the optional accessory lenses.  The front element group is bayonet mounted, is easily removed, and replaced with a 35mm or an 80mm group that can be used with an accessory viewfinder.  I do not have this set, and I have read that they are a bit cumbersome to use, even if they offer some versatility.  That said, I am watching for a set to come along just for the sake of trying it.  The available accessory lenses are marked Xenon or Heligon and must be used in the place of the original corresponding lens type.

Another feature is the film type reminder dial on the left side of the camera top.  Most contemporary cameras just have indicators for black-and-white or color film, with corresponding film speeds in ASA or DIN nomenclature.  This camera has actual Kodak film types on the dial, namely Kodachrome, Ektachrome, Tri-X and Plus-X.  Clearly, Kodak wanted us to buy Kodak film, or be lost.

Despite the above-mentioned quirks, I really enjoy these Retina cameras.  They are elegantly engineered, precisely built, easily worked on, and wonderfully odd.  They fold up to a pocketable size, have beautiful optics, and produce images on par with, yes, even the great Leicas of the day.  There…I said it.  I currently have three Leicas with Leitz optics and four Retinas, all from the same era, and there is no discernible difference in optical quality on 100-speed black-and-white film.  Beyond that, it is like comparing apples and oranges—I like both, and I want more of both.  Each has its own character.  Leicas are certainly more versatile in lens choice.  The folding Retina is more compact, and thus more convenient to carry.  Both evoke nostalgic romance and are a joy to use.  Cartier-Bresson used a Leica in the streets of Paris, Sir Edmund Hilary used a Kodak Retina on Mount Everest.  Different strokes for different folks.