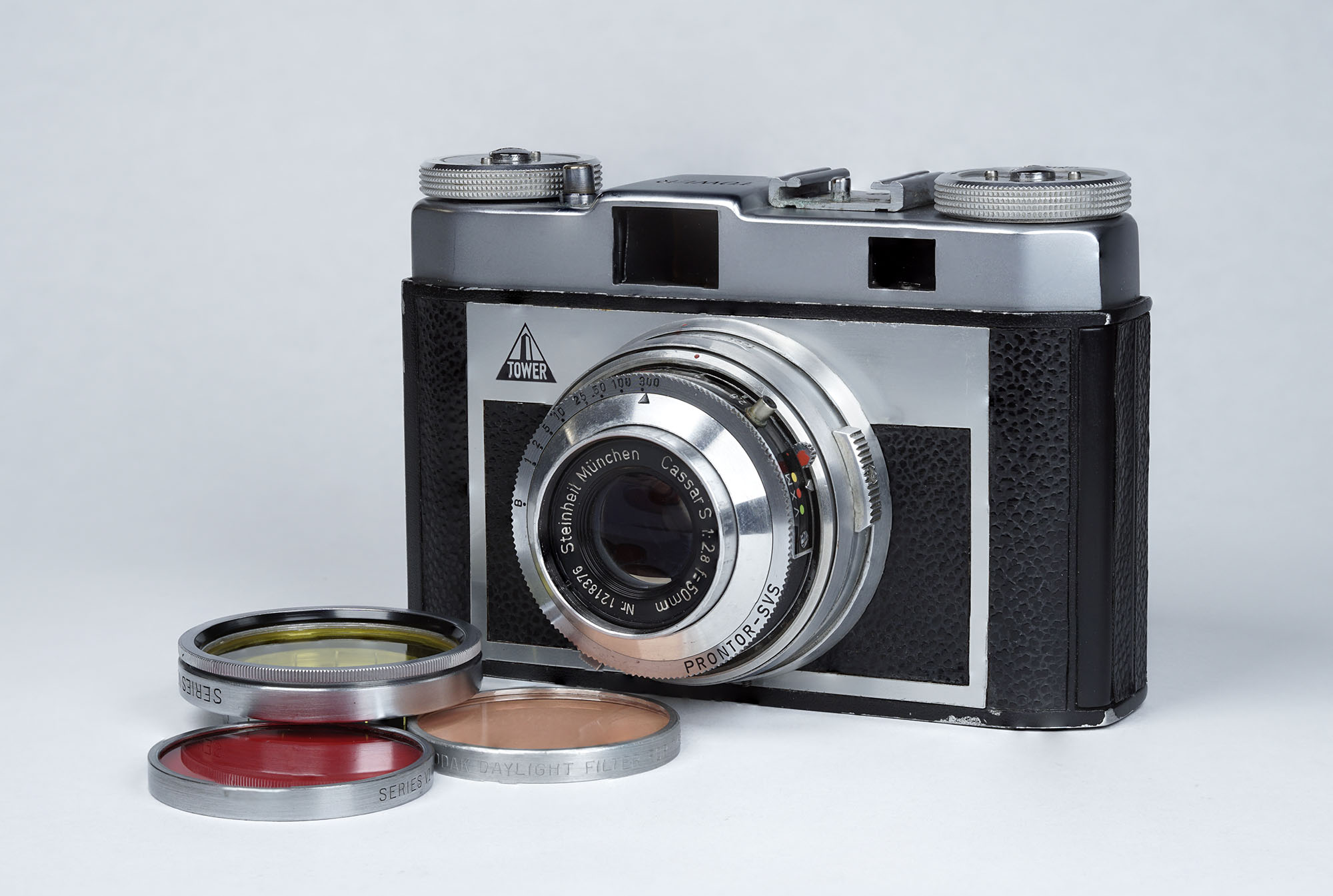 This was another thrift shop find about six months ago.  I knew nothing about the little rangefinder, other than seeing the “Tower” brand on an occasional Barnack Leica copy.  I recognized the branding on the lens, but only vaguely.  “Tower” didn’t sound like a typical German brand name, so to the web I went looking for answers.  The camera was built in the Iloca Kamera-Werk factory in Hamburg Germany around 1955.  “Tower” was the brand owned by Sears, Roebuck & Co. through which several cameras were imported and marketed.  With that sorted out, I set about to use it.

Even though the camera was marked “as is” in the thrift shop, everything seemed to be working, although a bit sluggish.  Old lubricants tend to do bad things over time, particularly when left unused.  Some will migrate to places they don’t belong, like shutter blades.  Other lubricants will give off a vapor that will re-deposit itself on glass lens elements, fogging the lens.  Many will just stiffen and dry out over time, rendering moving parts sluggish.  Such was the case with the rangefinder.  It was both slow and misaligned, but thankfully that wasn’t too tough to fix.

Three mechanical functions, namely, shutter speed, aperture, and focus govern the creation of a photo, and everything else is subordinate.  This camera is no different.  The Tower 51 is easy to use, and I suspect that was its raison d’être.  Perhaps Sears was banking on the prestige of owning a German-made camera during the heyday of Leica and Rollei.  The middle class market segment targeted by Sears in that era needed a simple camera at a suburban price.  The Tower 51 seemed to fit that demographic and price point.

Both form and function are basic and straightforward.  It appears to be built with typical Germanic precision, with a decent rangefinder patch, smooth focus, and a snappy but quiet leaf shutter.  There were no light seals to change in the film compartment, which is always a nice feature (it is my least favorite repair). Loading is straightforward, and instructions can be found printed inside the camera back.

One oddity is that the operation instructions are printed on the baseplate.  Another is the latch for the camera back.  To open it, one must use a thumbnail to push the spring-loaded side plate aside, and the back swings open.  This is very different than conventional methods, and I like it.  There is a cold shoe mount on top, and a PC cord socket on the lens barrel. There is also a film type reminder dial on the top left, in the middle of the rewind knob.  This is not coupled to anything; it serves as merely a reminder.

Shutter speeds, however, only go up to 1/300 second, also common among inexpensive rangefinders of the era.  Please remember that film speeds in the 1950s were typically slower than what we consider normal today. Tri-X was just introduced the year before as a high speed film.  Typical film stocks were under ASA 100.  So, using the “sunny 16” rule for an ASA 25 film stock in this camera, one would have an exposure of 1/25 at f16, or 1/50 at f11, 1/100 at f8, etc.  That’s not so bad.  For a typical middle-class, suburban Sears shopper this camera delivered holiday snaps without any complicated fuss.

Performing all three essential functions of focus, shutter speed and aperture takes place on the lens barrel.  The focus ring has textured pads on either side and a very short travel between minimum and maximum focus distance.  The shutter speed is changed with the knurled ring on the front edge of the shutter housing.  The aperture is adjusted via a tab on the bottom of the lens barrel but the scale and marker are visible on the top.  Neither the shutter speed ring or the aperture ring have detents.

Also on the lens barrel is a switch marked with the letters V, X and M.  Addressing their meanings, in reverse:  M is the flash sync setting for flashbulbs, which are largely out of use.  X is the flash sync setting for electronic flash.  V stands for “Vorlauf”, which is what English speakers call the self-timer.  The difference between using electronic flash and flashbulbs is that flashbulbs require a few milliseconds to reach full brightness.  The M setting triggers the flashbulb just prior to the shutter being fully open, so it will be at full brightness to make the exposure.  Electronic flash operates differently, as it needs to be triggered at the moment the shutter is fully opened. It is important to set the switch correctly for the type of flash being used.  If the switch is set to M, but an electronic flash is being used, the flash will fire prematurely and the exposure will be off.

So, if that switch is moved to “V”, and you are using flash with the self timer, how does it know when to trigger the flash?  The answer is that it defaults to “X”, or the electronic flash setting.  Remember that the manual is printed on the baseplate?  It says for flash pictures, set the shutter speed to 1/50.  That may be slow enough to accommodate both types of flash, even with the self-timer which defaults to the electronic setting.  However, being a leaf shutter, it will sync with electronic flash at all shutter speeds.

The lens is marked “Steinheil Munchen Cassar”, and is a 50mm f2.8 lens.   Steinheil Munchen was an optical company that dates back into the 19th Century.  They invented the Aplanat lens in 1866, and operated into the 1970s.  Their products included both cameras and lenses.  “Cassar” is one of their trademarks and is a simple triplet lens.  Image quality is as good as one can expect from a mid-century triplet. It is not particularly contrasty, and can be a bit smeared in the corners. Images are adequately sharp for typical use, but fall short of professional quality. Still, I have no complaints, as it fulfills its purpose as a well-built, yet affordable camera.

The Tower 51, (also branded as the “Iloca Rapid B”) is built of metal and glass, and even the parts one would expect to be plastic are indeed metal.  I was surprised that the self-timer worked perfectly on the first try.  In my limited experience, the self-timer and the slow shutter speeds are the first to gum up and slow down.  Sometimes I think a camera is working well until I set the self-timer (and then I end up taking the dang thing apart to fix it).  All in all, this is a simple, yet robust and reliable rangefinder camera.  It was a budget-friendly camera, but has held up surprisingly well considering its age.  They are currently selling for ridiculously low prices on the big auction site, and for under $25, including shipping, one can have a solid German rangefinder that just may outlive the buyer.

Flash Sync:  1/50 second recommended, but syncs at all shutter speeds

Hot shoe:  No.  Cold shoe only