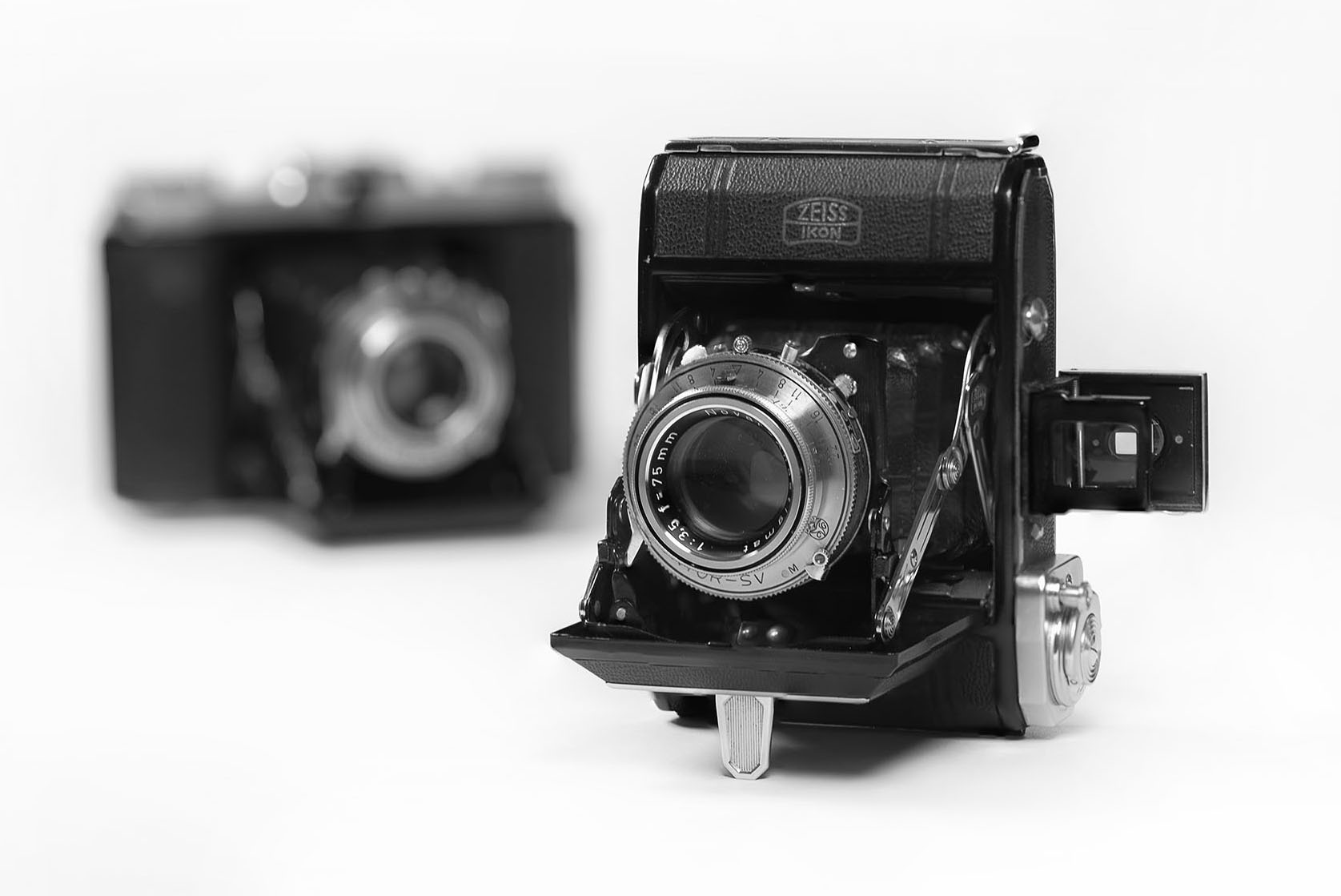 My first ever 6cm x 4.5cm medium format camera, this was included in a box of miscellaneous camera gear from my wife’s very kind aunt as she was distributing her late husband’s belongings.  I already had the Ikonta 523/16, and recently posted my review of it.  I have come to enjoy the quirky folders in both 35mm and 120 film formats.

This old soldier had been exiled to a hot garage for years, and still worked remarkably well after a little attention.  I cleaned the optics, re-lubed the focusing helicoid, and the shutter came back to life after a little exercise.  Fortunately the bellows were still light-tight, so within an hour it was ready to go to work.

I put it to work on a recent trip through the Southwest.  We had an unplanned stop in Albuquerque, and I managed to take an early Sunday morning stroll through the artsy Old Town district.  (The unfortunate circumstances surrounding that trip were described in a previous post about the Nikkor 35-135mm lens).  It also accompanied me on a trip through Nevada.

The first characteristic of this camera that struck me was the inherent vertical orientation.  On a strip of 120 film being fed horizontally through a camera, the images are vertically oriented.  I have been asked how so many different sizes of pictures can be made on a single type of roll film, and the answer is that they all utilize the useable 6cm width of the strip of film as one of the sides of the image.  6x6cm is square, while 6×7, 6×8, 6×9 and 6×12 cm images are oriented horizontally relative to the strip of film.  6×4.5cm images have their long axis perpendicular to the strip of film.  The net result is that the viewfinder shows you a vertical image.  The only other cameras I have with an inherent vertical orientation are 35mm half-frame cameras.

I am so accustomed to expecting a horizontal view in a camera that this required me to mentally adjust and adapt.  A bit awkward at first, it eventually became a fun exercise.  It was simply a bit odd to turn the camera 90 degrees to get a “landscape” oriented image. Adjusting the aperture and shutter speed is done in that same vertical, or “portrait” orientation.

I mentioned in the post about the Ikonta 523/16 that it is compact and pocketable, which it is.  The Ikonta 521 is even smaller and more pocketable.  Folded up, it required very little space in my camera bag, and fits in my back jeans pocket without a problem.  That is pretty remarkable for a medium format camera.  It has nearly the same exterior dimensions as my Kodak Retina IIIc, and is 152 grams lighter.  Moreover, it produces an image with over three times the film area than the 24x36mm image.

Operation is as follows:  After the film is loaded, the camera is opened by pressing the button on the right side of the camera top.  This opens the front of the camera and extends the bellows, locking it into place.  It also pops up the two-piece optical viewfinder. Now advance the film to the first frame.  The red window on the back is for viewing the frame numbers, and the take-up spool is wound clockwise until the frame number appears in the window.  The distance-to-subject is set by rotating the front element of the lens with the distance scale.  The shutter speed is set with the knurled ring, and the aperture is set with the toothed tab that protrudes up from the back of the shutter housing.  The shutter is cocked with the lever on top of the housing, and it is ready to take a photo.  The shutter release is on the left side of the camera top, and that is tough to remember the first few times.  After the photo is taken, the bellows can be closed again by pressing in on the chrome tabs marked with the “Zeiss Ikon” logo.  Make a habit of opening the bellows before advancing the film.  This prevents any dust from landing on the film as a result of air rushing in.

If one can accept the limitations and quirks, this is a powerful little image-maker. That said, it is not a Hasselblad nor a Rolleiflex nor a Mamiya.  Optical quality is exactly what can be expected from a postwar simple lens.  It gets a little soft and smeared in the corners, is a bit soft wide open, (with slightly swirly bokeh), and lacks sophisticated corrections and coatings that more modern optics have.  It has no rangefinder, so the distance to the subject must be measured or estimated and the focus ring set accordingly.  Nor does it have a light meter, so exposure must be measured with an external meter or estimated.  I have an an external rangefinder, but the 521 has no cold shoe on which to mount it.  This is a simple camera, and any expectations thereof should reflect that.  Compromises were clearly made in the interest of portability and economics, but at the cost of convenience, luxury and optical perfection.

A coupled rangefinder like those found on the Super-Ikonta series would be a welcome feature, and I’m sure I’ll end up with one of those at some point.  Meanwhile, I am getting better at estimating distance.  If I am photographing a close subject with limited depth of field, I am more careful about distance and use the external rangefinder.

Sometimes size matters, and I really enjoyed having a medium format film camera that takes up such a small amount of space. It is, after all, a compact travel camera.  If I want medium format studio-quality perfection, I have cameras that do just that.  Unfortunately they are not very convenient to lug around.  I have a neck strap for my Mamiya RB67, but it’s just for decoration—can’t bring myself to actually use it.  TLRs are wonderful and take up less space than the RB, but they are still boxy and need to ride in a bag.  These folders allow me to indulge my analog habit just about anywhere without a bag or a hassle.

Rangefinder:  No, Viewfinder only.

Flash Sync: Yes, at all speeds.