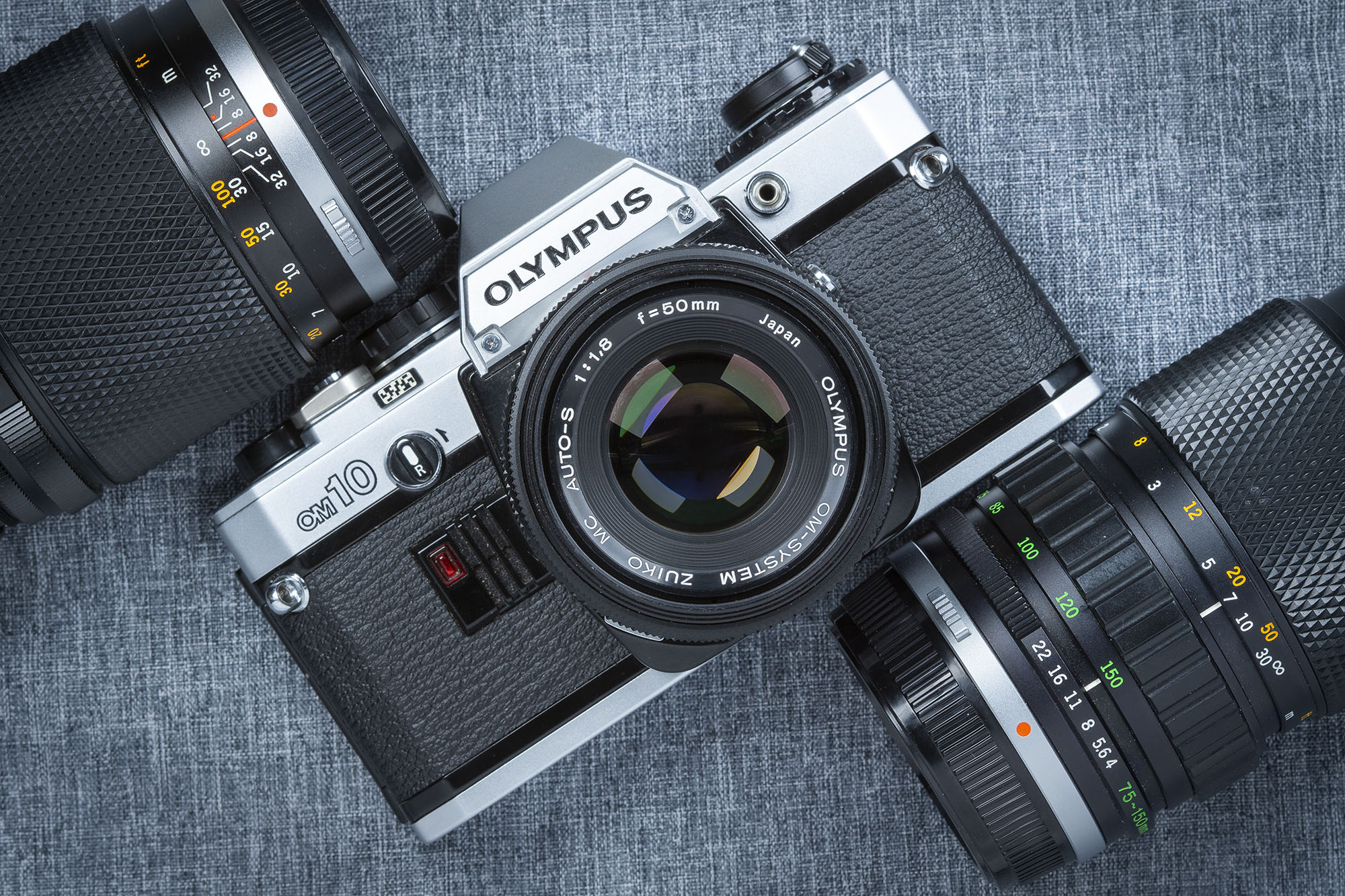 Until now, I had never owned an Olympus SLR.  I had a small Olympus viewfinder camera a few years ago, and I regret selling it, because it was really quite nice.  The OM series of SLRs just never crossed my path until recently, over the course of a few weeks, I was given an OM-10 with a 50mm/f1.8 and a 75-150mm/f4 lens.  I had just purchased a 50mm/f1.8 and a 200mm/f4 at a thrift store for $10 each, and had ordered an adapter to use them on my Sony mirrorless.  Meanwhile, another 50mm/f1.8 fell into my lap from somewhere else.

I replaced the light seals in the OM-10 body, because the old ones had turned to asphalt.  After installing new batteries, blowing a little dust out of it and wiping off the typical surface grime, there was a perfectly useable camera and a set of lenses.  At that point, the only thing left to do was use them.  I loaded up a roll of Tmax 100 and carried it on a recent trip into Nevada, a short hike in the desert, and in the local botanical gardens.

As far as a user experience goes, the OM-10 is a straightforward, aperture control only body.  There is an optional adapter that plugs into the left front side of the body and provides manual shutter speed control, but I haven’t picked one up yet.  It was intended as a lightweight, entry-level camera that offered simple operation and low cost.  Compromises were made in manufacturing that made it possible.  That said, many of them are being dusted off and put back into service.  That says something about the overall quality.  I enjoyed its size, weight and simplicity while traveling and hiking.  Compared to vintage pro-grade bodies, this is a dream to carry around.  The glass is quite light also.

A switch on the top left turns on the electronics, including the meter and the shutter.  When turned to “check”, the red LED on the front of the camera lights up and there is an audible signal that indicates that the batteries have sufficient charge.  When turned to “On”, the camera is, well, on.  It’s ready to make photos.  There is a “self-timer” position which should be self-explanatory.  When in the “off” position, however, it is a bit misleading because it isn’t really off.  The meter readout in the viewfinder is turned off, ostensibly to prevent battery drain, but the camera works just fine.  The meter is working, activated by the shutter release button, and the shutter will release at the proper speed.  I assume that the meter only operates for a brief moment and then returns to a dormant state until activated again.

This could be a double-edged sword.  In a way it is convenient for taking quick snapshots without fiddling with switches.  Conversely, the feature may result in photos of the inside of the camera bag, if stored with the shutter cocked.  The shutter release button is not so prominent as to be easily tripped in the bag, so it is likely not much of a problem.  Honestly, I would rather have an occasional, accidental blank frame than miss a fleeting “decisive moment” shot because I failed to turn the camera on in time.

There is also a switch on top right (on the ASA dial) that toggles between Bulb mode, Auto Mode and Manual Adapter.  Unless you have the adapter, this should stay in Auto or “B” (when making exposures longer than one second).  Another oddly placed switch is the film rewind selector on the front of the camera below the shutter release.  To me it just seems like an unusual location for it, but it doesn’t cause any problems.

Other than understanding the switch mechanisms, there really weren’t any real surprises.  It is a basic, user-friendly camera.  There are a couple of things I would like to have seen on the OM-10, like a PC cord socket for off-camera flash, and a “+3+2+1.0.-1-2-3” switch for bracketing and minor corrections for lighting conditions.  There are workarounds for both of these. With a hot shoe-PC adapter, wired off-camera flash can be easily triggered.  Alternatively, the common wireless flash triggers work fine.  For bracketing, one can just change the ASA dial appropriately for more or less exposure.

After acquiring the adapter for the Sony, I proceeded to compare the three 50mm lenses.  There were two different versions represented, and although the prevailing opinion on the web is that one version is superior to the other versions, I couldn’t detect any significant difference.  All three of the 50s were excellent performers on the Sony.  To be honest, it surprised me how sharp and clear they are.  I had heard good things about Zuiko glass for years, but had little experience with it until now.  I can see why Olympus has a strong following.

The 75-150mm zoom and the 200mm prime are in practically mint condition, but I have yet to really test them on a digital body.  I found them difficult to accurately focus on the film body, except in bright daylight, due to blackout of half of the split image in the focusing screen.  This is not endemic to Olympus—older bodies with slower lenses and darker screens often have the same problem.  Consequently, several of the shots were out of focus by just a hair.  A tripod would have helped prevent that, but it just wasn’t convenient.  I intend to review the lenses in greater detail in the future, but in the meantime, I’ll just enjoy the kit as a whole.  It may lead down a new rabbit hole of Zuiko glass.  So far, I like what I see.