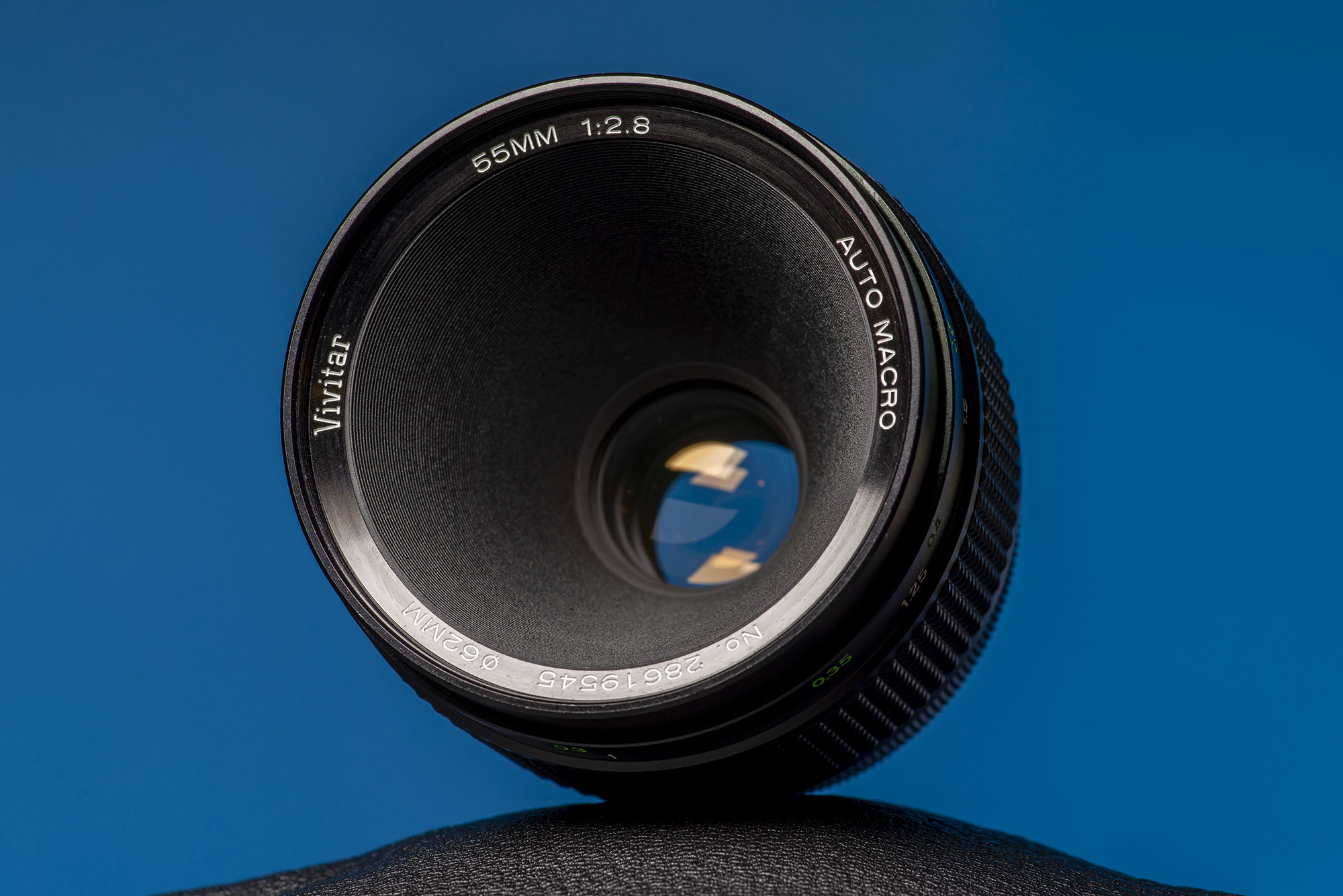 Another thrift shop find, it sat in a pocket of a Minolta Maxxum kit.  It clearly didn’t belong, as the the lens mount was a manual-focus Minolta MD mount rather than the autofocus version.  It would not fit on the Maxxum camera.  I convinced the clerk to split up the set and sell me the lens separately (as I did not want the Maxxum kit).  For a total of $8 I took home what has turned out to be a remarkable lens.

A little research turned up some history of the lens.  Vivitar was the brand name, but not the manufacturer.  This lens was manufactured by Komine, according to the serial number and the available records. I know little of Komine, other than running across the name in my research from time to time.  There are a quite a few reviews out there, but this lens managed to fly under my radar for a long time.  I was not aware of its popularity among the vintage lens crowd.

Macro lenses are a specialty category of optics.  They are generally not very “fast” lenses, and often have a maximum aperture of f2.8, 3.5 or 4.  That speed appears to be sacrificed for sharpness.  Macro lenses need to be very sharp, even at small apertures.  Please keep in mind that I am talking about prime lenses with a close-focus construction.  There are many zoom lenses out there with a macro setting, and that gets you closer than the normal minimum focus distance.  These are usually limited in the degree of magnification, often in the 1:4 range.  True macro prime lenses should get us into at least the 1:2 or 1:1 range.

This was my first macro prime outside of the Nikon system.  The Micro-Nikkor lenses are legendary, and I have had several of them pass through my hands over the years.  I still have a couple of 55mm Micro-Nikkors in f2.8 and 3.5 that I use frequently.  I also have a Tokina ATX Pro 100mm f2.8 that is responsible for a lot of the close-ups of cameras and lenses on this blog.  This lowly Komine-Vivitar came in quietly and shook up the dominant paradigm.  I have now used it for a number of applications and it really shines.  It also made me aware of my own optical snobbery, as I assumed it would not compete with the Nikkor glass.  Spoiler alert:  It does.

My Micro-Nikkors will achieve a 1:2 magnification ratio without an extension tube.  With the PK-13 tube they reach the 1:1 ratio.  The Vivitar reaches 1:1 all by itself.  The focus ring just keeps going around as the front element group telescopes out.  A double focus helicoid system allows this.  The magnification ratios are engraved on the internal lens barrel and become visible as it extends.

As far as user experience goes, this lens brings a smile to my face when I use it.  The focus ring is well damped and has no creep or wobble.  The aperture ring clicks into the detents at half-stop intervals and feels solid.  (Granted, this lens came to me in excellent condition, with no signs of abuse—carelessness can destroy any lens.)  It appears to be well engineered and solidly built.  This is necessary for a macro lens.  For a tabletop studio setup, it is ideal.  For shooting outdoors, and particularly with live subjects, a longer focal length macro may be better.  Either way, I would really recommend a sturdy tripod or camera mount, and a macro focusing rail isn’t a bad idea, either.

Potential drawbacks are as follows:  Having a minimum aperture of f16 may have been a limitation back in the film era (Micro-Nikkors go to f32), but I rarely use f22 or 32 anyway.  When used on a modern digital body, focus stacking is available (and easy) in post processing and has become a mature science.  Also, when focused to its minimum focal distance, the subject is only about 2 inches from the front ring of the lens.  Depending on the type of subject, this can be too close for comfort.  That proximity may disturb a live subject.  Bees on sunflowers come to mind.  Hornets’ nests are right out of the question.

Achieving excellence in some aspects of lens design may require compromises in others.  Some reviewers on the web claim that the Micro-Nikkors are not well corrected for far-off subjects, particularly at the infinity mark (but this has not been my experience).  Once I realized just how well the Vivitar performed in a macro setting, I wondered if it performs equally well as a normal, walk-around lens for general use.  Spoiler alert #2:  It does.  It is still remarkably sharp at all focal distances and I have yet to find a fault.

For quite a while I have used a Micro-Nikkor 55mm f3.5 to digitize film.  Perhaps someday I’ll write up that process, but the nutshell version is that I use a Sony a6000 with the 55mm and a PK-13 extension tube to photograph backlit 35mm and 120 negatives in 3D printed film holders. For this application, I require a few things from a macro lens.   Specifically, I need a flat focal plane, edge to edge sharpness, no distortion, and the ability to resolve film grain with 100 ASA film.  Since I’m using it on an APS-C sized sensor, any edge sharpness issues aren’t apparent.

On a whim I attempted this with the Vivitar instead of the Micro-Nikkor, expecting some degree of disappointment.  That disappointment never materialized.  The Vivitar exceeds my expectations and performed that task as well as the Nikkor.  I was humbled.  In fact, it made me wonder how many “Cinderella” lenses are out there, waiting to distinguish themselves in a digital world.