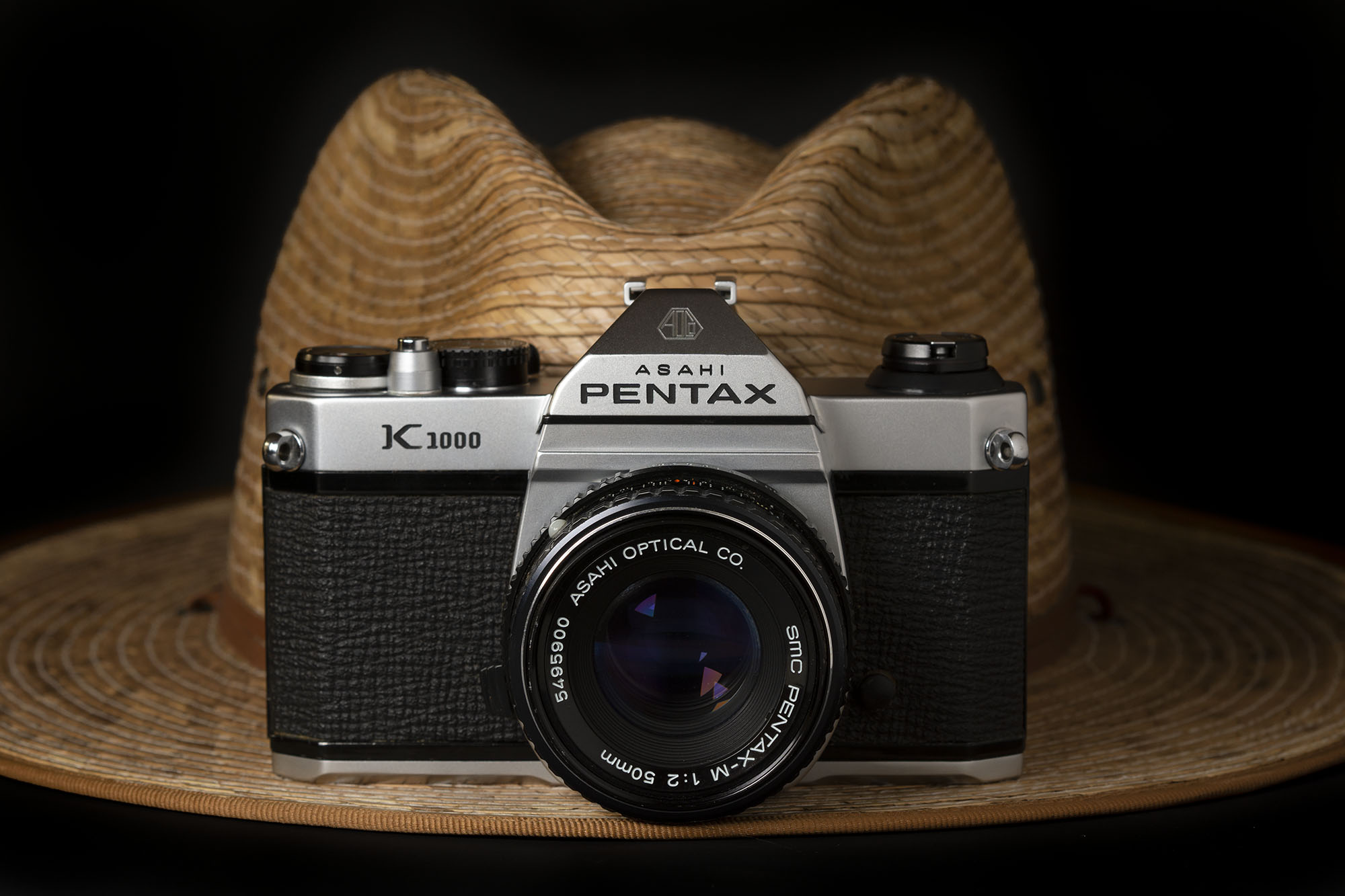 This was a rescue puppy.  I really don’t know how else to describe it.  It sat in the glass case of a local pawn shop, and I had eyed it a few times.  It was dirty, neglected, and unloved.  Three lenses were included in the package and they were all garbage.  I saw some potential in the body, and I knew where there was a standard 50mm f2 lens in good shape.  I worked out a mutually-beneficial trade with the shop owner and took it home.

Although a K1000 had passed through my hands a few years ago, I let it go because I had little intention of building a K-mount system.  I am still no closer to building that system, but I felt compelled to allow that camera a second shot at life.  It would have been purchased by a local college student taking the film photography course, and he or she would have been sorely disappointed and frustrated.  The light seals were just plain gone and the lenses were unusable.  I managed to salvage the body, replace the seals, and give it a good bath.  Once it was cleaned up, it actually looked like a nice camera.

The K1000 has always been the vanilla flavor of cameras in my experience.  Basic, but indispensable. It couldn’t have been a very good camera—after all, it was being used by high school yearbook photographers, not by seasoned professionals. Honestly-how good could it possibly be?  A few decades later, my perspective has changed about certain things.  I have come to appreciate mechanical shutters that just keep working when contemporary electronic shutters seem to be failing at an increasing rate.

A family member has had one since the late 1970s, and his son recently dusted it off and brought it to me for new light seals and a checkup.  Other than the old seals, it works just fine after sitting under a bed for fifteen years.  That alone inspired me to rescue this one from the pawn shop.  I threw away the irreparably damaged lenses and picked up a nice 50mm f2 elsewhere for nearly nothing.

The K1000 is a simple, straightforward camera body.  There are no mysterious controls, switches to flick or knobs to turn.  On the camera top there is a shutter speed dial with the ASA window, a film advance lever, a film rewind knob, frame counter, a hot shoe, the shutter release button, and a shutter status indicator.  That’s it.  On the front there is nothing but a PC cable socket for off-camera flash.  There are no automatic modes or electronic controls of any kind.  The shutter is mechanical, and the battery only runs a simple needle meter that is visible in the viewfinder.

In that viewfinder there is little to distract from the photo being created. On the right side there is a simple meter with plus and minus, indicating over- or underexposure, and a middle zone.  The middle area correlates to Zone V in the classical zone system of exposure.  The top and bottom margins of that open middle area are plus or minus one-half stop.  There are no LEDs, LCDs or visually distracting elements in view.  Even the center of the focusing screen has a very simple micro prism focus aid that works quite well for most scenes.  The view is gloriously simple and clean.

I believe it is this simple purity of function that led to the K1000’s legacy as the quintessential student camera.  It is a perfectly adequate tool for teaching the principles of photography without any shortcuts.  Add to that the fact that it is remarkably robust, and we have a camera that will withstand years of student backpacks, steel hall lockers, weekend bonfires, high school sporting events, and adolescent carelessness.  Perhaps, as I get older, I more fully appreciate those things that stand the test of time in the face of adversity.

The user should be aware that since there is no on/off switch, the meter is basically always on.  If there is light traveling though the lens and being read by the meter, then battery drain will occur.  This isn’t a real problem in typical use, but if it is openly stored on a shelf with the lens cap off, the battery will be depleted.  Just pull the battery out if it is to be used as a display.  At first this seemed like a disadvantage, but it was likely the necessary compromise for ultimate readiness.  I have missed many shots because the camera I was using wasn’t “ready”.

Something else worth noting is that there were evolutionary changes to the K1000, and they may have affected quality.  This is not surprising, considering that some form of the K1000 was manufactured from 1976 to 1997.  To keep production costs (and thus retail prices) down, manufacturing was moved to Hong Kong in 1978.  Later, in 1990 it was moved again to China.

Minor external changes were noted after moving to Hong Kong, but a major change occurred in 1990.  When production was moved to China, the metal top and bottom were replaced with painted plastic, and there is indication that some of the meter components were made from less expensive materials.  The film speed dial changed from metal to plastic.  Little changed in the aesthetics of the camera except the name on the pentaprism.  “Asahi” and the AOco logo disappeared, ostensibly to be more brand-consistent.  Mine appears to be a Hong Kong version built between 1978 and 1990.  It has the metal top and bottom and the Asahi logo.

Why did it become such an iconic camera, if it is so basic and simple?  Probably because it was so basic and simple.  I can certainly understand an art/photography teacher wanting the student to learn the basic principles of shutter speed, aperture and focus.  Automatic modes would rob them of that.  There’s nothing inherently wrong with automatic or program modes, but there is value in understanding how the camera controls the amount of light hitting the film.  It allows the budding photographer to take control when necessary and tell the camera what to do.

I wonder how many photographers got their start with a K1000.  I’m sure it launched more than a few careers.  With over three million cameras produced over the course of more than 20 years, the K1000 has certainly made its mark on the photography world.  It appears to be enjoying its second childhood, as popularity of the vanilla SLR has seen a resurgence.  Ten years ago I never would have guessed that old film cameras would be in demand, vinyl records would be for sale in every music store, and my kids would be listening to Fleetwood Mac and Jimmy Buffett.  You won’t hear me complaining…