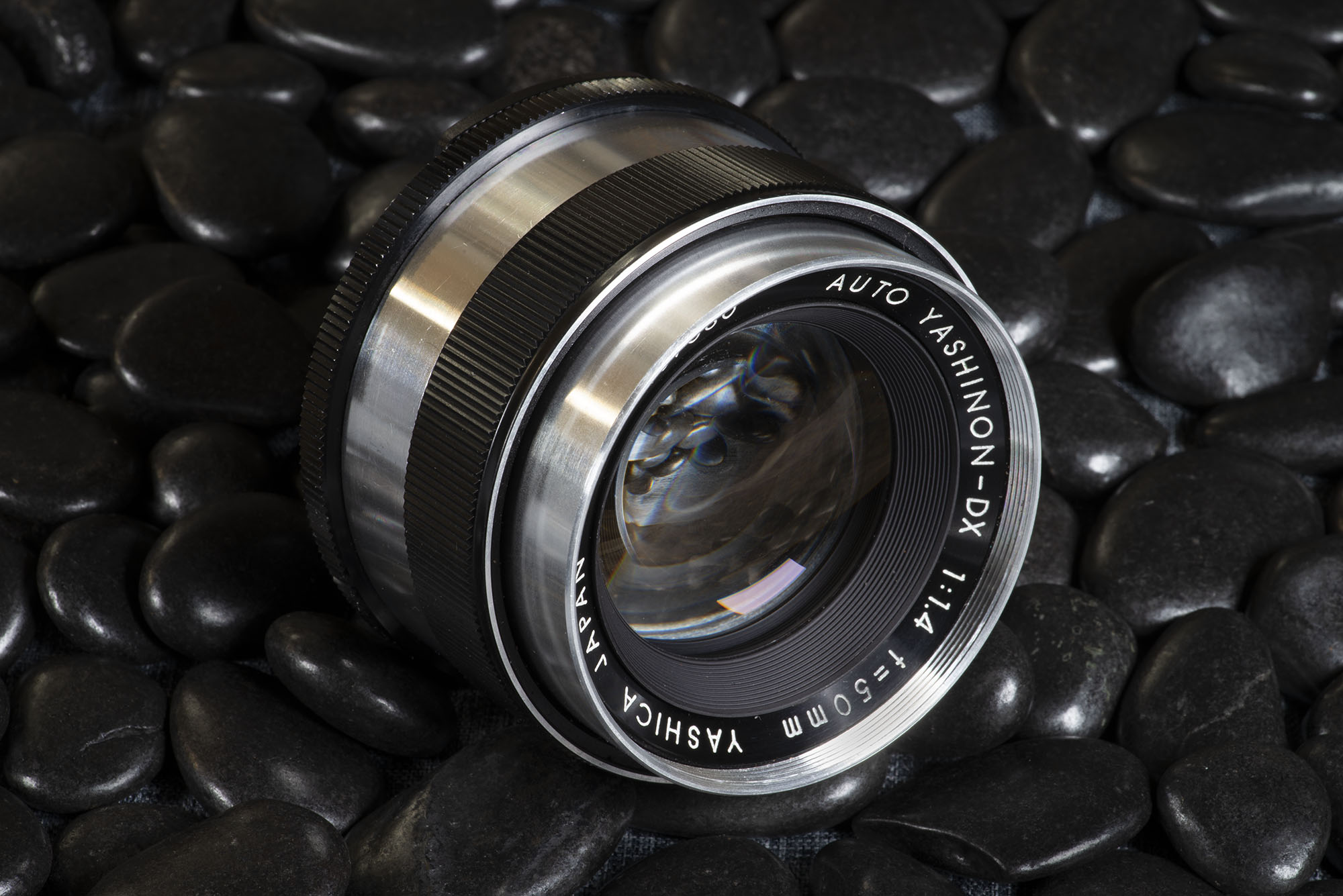 This was another lens that flew under my radar for a long time.  It came to the collection as part of a $10 thrift shop purchase, attached to a Yashica TL-Super SLR.  The body was in good shape and the shutter worked, and so at that price anything is worth it.  I didn’t understand that the lens was the bargain in the deal.  That said, this lens caused me more headaches than I bargained for.  Your experience with this lens will undoubtedly be better than mine.  In the end, I’m glad it joined the family.  I’ll write something up about the body later.

The optical block was loose in the lens barrel, and decades of schmutz had entered the workings. The aperture was oily and the focus helicoid was dry.  A total overhaul was called for.  Fortunately, the optics were reasonably well preserved.  There were a few tiny scratches (AKA “cleaning marks”) on the front element, but nothing deep enough to cause image degradation.  I went to the web to find any info about disassembly and cleaning, and set about to return it to its former glory.

I thought I had done a decent job of it; the aperture was clean and snappy once again, and the focus helicoid felt consistent and smooth.  The glass surfaces cleaned up nicely and it looked like a great lens.  Then I tried to use it.  It wouldn’t focus to infinity.  In fact, it wasn’t even close.  I remembered marking the position where the focus helicoid left the threads, and I had returned it to the same entry point.  I soon figured out that there is another threaded ring that must be backed out just enough, prior to reinstalling the helicoid, that I had overlooked entirely.

What ensued was a seemingly endless cycle of assembling, testing, and disassembling the bloody thing. That nonsense lasted until just after 5:00 am, at which time I quit in disgust.  Logical me should have thrown it away and just bought one elsewhere. They’re really not that expensive.  It was simply too pretty to let go, despite the pain and strife it caused. Taken out of context, that is really awful relationship advice.  Trust me.

Taking up the challenge the next day with a better attitude, I stumbled across the right combination, probably by sheer chance.  At that point I had a lens that was perfectly useable, and it has been a fun lens to use.  It has inherent optical flaws, much like many other vintage lenses.  Those flaws can either be complained about or used to good effect and called character.  Never would I try to compare this lens to the latest offering from Nikon or Canon or Sony or Zeiss.  It’s simply not comparable.  That doesn’t mean it’s not a good lens, because it is.  I guess that requires some explanation on my part.

Part of the joy of using vintage lenses comes from creating images that look like they were shot with vintage lenses.  In an age where there are film emulation algorithms and “retro” filters, there is some authenticity to using actual vintage glass to create an image.  Artificially generating lens flare somehow seems like fakery, particularly when I have a lens that creates amazing lens flare all by itself due to its archaic coatings or lack thereof.  Perhaps it’s just me, but I don’t go see tribute bands perform for the same reason.  The music may sound the same, but the experience is different.  Part of me remains unconvinced.  This lens will create authentic vintage rendering with all the retro charm one can handle.

Form may follow function, but shouldn’t be dismissed.  After all, photography is half art and half science, and we enjoy the aesthetics of both the tools and the products.  With that in mind, I have to say that I find this lens quite attractive.  Its “zebra” construction with alternating black and chrome rings sets it apart from many other contemporary lenses and is instantly recognizable from across the street.  The aperture and focus rings are very well textured and don’t require any fiddling or searching to find them.  Proper cleaning and lubrication allows the quality workmanship of the mechanics to be felt upon turning them.  Metal and glass construction results in a heavy but robust piece of equipment.

On the top of the lens there are two windows in the chrome ring.  The forward window is the focus scale marked in feet and meters.  The rear window is the aperture scale.  Unlike most lenses, which show the entire range of apertures on a completely exposed ring, this is a small window that only shows the aperture to which the lens is set.  Some find this awkward.  I do not.  If anything, it presents only the important information in an almost minimalist manner.  The depth-of-field scale is engraved on the chrome ring and the lettering is black.  The result is a very clean visual interface with little or no searching required.

The rear of the lens is also very simple and uncluttered.  Yashicas of that era were fitted with an M42 mount, as were several other manufacturers’ lenses.  This allows the use of the lens on other M42 bodies.  There is a pin for aperture control by the camera body.  There is also a sliding switch marked A and M adjacent to the thread mount.  This refers to Automatic or Manual aperture control.  Keeping the switch set to “A” while on the film camera body allows the user to focus with the aperture wide open.  The body depresses the rear pin to automatically close the aperture to take the photo.  Other M42 bodies did not have that option and required full manual control of the iris.  Similarly, many M42 adapters for digital cameras don’t have a flange to keep that pin depressed, and that’s when the switch comes in handy.  Just slide it to “M” and you have full control regardless of the adapter.

There are some reports that the rear element of the lens protrudes far enough back into the camera body to interfere with the mirror in Pentax Spotmatics.  I tested it with my Spotmatic SP, and it does indeed block the mirror when focused toward infinity.  When tried it on my Spotmatic SP F and ESii, the lens wouldn’t even screw on all the way.  Please be advised of that if you have any intention of using one with a Pentax M42 system.  I believe that type of incompatibility is the exception rather than the rule.  I also tested it on a Sears TLS M42 body without a problem.  Of course, it works just fine on the Yashica TL-Super that it rode in on.

Conclusion:  This is a nice 50mm.  I have several nice 50mm lenses already, but this one has a unique character.  This is one of those lenses I would keep for the sake of creating artistic, vintage, dreamy images and try to master its ability to do so.   Wide open, it has that soft, vintage glow. Stopped down into the middle apertures, it is remarkably sharp.  I can’t quantify that, nor do I feel the need to, but I’m happy to say that it exceeded my expectations for a budget vintage lens.