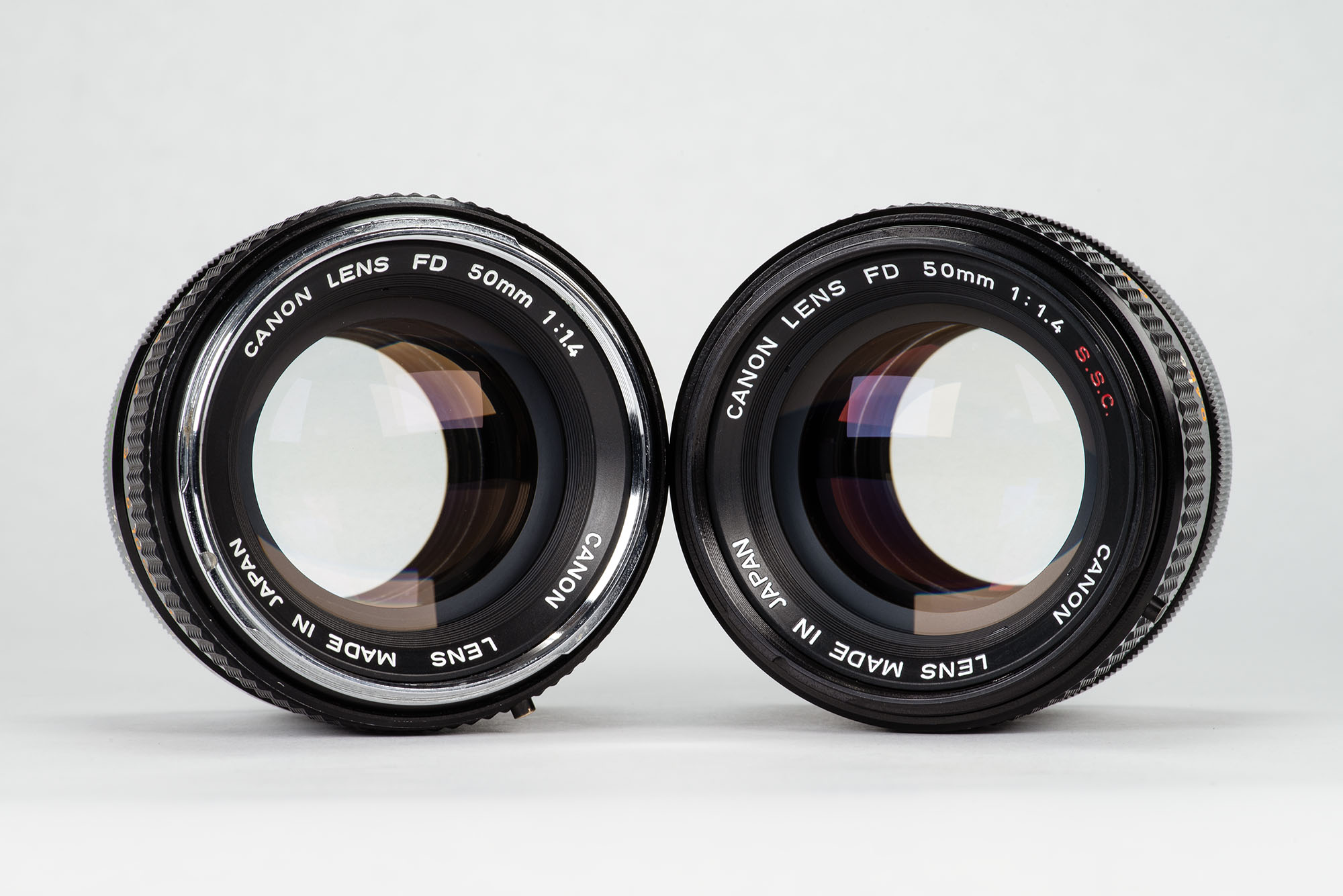 Both of these came along at about the same time, and I was originally thinking about writing up separate reviews.  Then I used them.  I found that for everyday photography, they appeared to behave the same.  Produced only two years apart, they contain the same optical formula, although one is significantly heavier than the other.  I’m not quite sure why.  Both feel solid and built for serious use, the action is very smooth on both, and they create virtually indistinguishable images. The latter of the two, with the “Super Spectra Coatings” (S.S.C.) should perform better in certain lighting, but we’ll get to that in a bit.

These lenses represent a small piece of the Canon 50mm f1.4 timeline.  There have been 50/1.4 lenses named Canon since 1957, and I suspect there will be until 2057.  These two were introduced in 1971 and 1973, respectively.  They are beautifully  built, function smoothly, and are reported to be optically excellent.  These lenses come from an era of fierce competition,  and by this time, designing a 50mm lens was a fairly mature science.  Canon is still using the same optical formula (7 elements in 6 groups) in their EF lenses, albeit with more advanced glass.

The “chrome nose” lens came to me attached to a Canon FTb body, a $20 thrift shop find.  It was perfectly functional and just needed a little external cleaning.  The later lens was a pawn shop find.  When the S.S.C. lens is attached to a body, it is easy to actuate the shutter or DOF preview and visually inspect the aperture blades.  One can see the mechanical parts all working as they should.  When the lens is all by itself, the aperture is locked in the open position until mounted to a body.  This makes it more difficult to quickly assess its functionality.

There is a small mechanism in the lens mount that allows one to unlock the aperture, but it requires a small tool to disengage it.  Some local shops know me well enough to let me thoroughly test a lens before buying it.  This particular shop was not one of those, so I was hesitant to go digging around in the mount.  I bought it and took it home.

Once I got it home, I unlocked the aperture and sure enough, it was swimming in oil.  You win some, you lose some.  I started taking it apart and discovered that it was quite easy.  In fact, the whole aperture mechanism comes out as a unit and was easily cleaned with minimal fussing and cussing.  Within 30 minutes I had a clean lens with a snappy aperture.

Some online reviewers mention the weight of these old Canon lenses as being excessive.  One review of the S.S.C. lens questioned if the weight was a deal-breaker.  Curious, I lined up my contemporary 50mm f1.4 lenses and weighed them without filters or caps.  Here are the results:

Yes, it is heavy, but It doesn’t appear to be dramatically heavier than its peers.  Let’s face it…It is an f1.4 lens made almost entirely of metal and glass.  F1.8 lenses of the same era were noticeably lighter, as were later lenses which incorporated more plastics and lightweight aluminum.  With the differences being less than 75 grams, I really can’t complain about the weight.  Fast-forward fifty years, and we have the Canon EF 50mm f1.4 USM lens weighing in at 290 grams—only 13 grams less!  A good filter and hood will make up more than that difference.  Still, some will continue to complain.

I had assumed that the chrome-nose 50mm would be comparable and initially neglected to weigh it.  When I did it came in at almost 370 grams!  Whoever the complained about the S.S.C. version being heavy had clearly never hefted one of these.  Why the difference?  I have no idea.  The optical formula is the same, the dimensions are not radically different, so I can only conclude that Canon lightened the design by either a: reducing the amount of metal in construction, or b: using a lighter metal, i.e. aluminum instead of brass.  I haven’t yet torn into the chrome-nose version to see what its internal organs look like.

These lenses are currently listed on the big auction site for between $70 and $150 USD.  In decent shape, I would expect to pay around $100.  I understand that old FD mount Canons are also popular among the video crowd, and get the “Cine Lens Mod” treatment.  These same lenses modified accordingly are listed for $500+.  Clearly somebody likes the look they produce.

In a side-by-side controlled indoor comparison, the chrome-nose version held a slight edge at f1.4 and f2, with the S.S.C. version performing slightly better at f2.8 through f8.  Results are only good if they are repeatable, so I repeated the test.  This time, the chrome-nose again held the lead at f1.4 and f2, but they were virtually indistinguishable for the rest of the test.

I wanted to demonstrate the direct benefit of the S.S.C. coatings, and I couldn’t in this controlled indoor studio test.  So, I went outside with consistent lighting, sturdy Italian tripod, and an open mind.  This time the difference in image quality was more apparent at the far end of the focal scale.  The chrome-nose lens again performed the best at the widest apertures, with very little spherical aberration, or “glow” that is so typical to old glass at its widest apertures.  Frankly, the S.S.C. version was significantly softer wide open.  In the middle apertures they performed about the same.

This struck me as odd, because the “better” lens was the earlier of the two, before the Super Spectra Coatings.  The takeaway is this:  If you had a different set of the same models, the results may be reversed.  There have always been slight variations from unit to unit, and this is simply how my examples performed.  From such a limited sampling, I cannot make any generalizations about the effectiveness of the S.S.C. coatings.

Either lens will produce excellent images in the right hands.  My user experience with both of them is very positive.  The transition from in-focus to out-of-focus is natural and unobtrusive.  Colors seem to be rendered naturally without any obvious cast.  I find the bokeh to be pleasing and not distracting.  Others will disagree with that, but one man’s flaw is another man’s feature.  De gustibus non est disputandum.

When mounted on a film body, a 50mm/1.4 lens provides a bright image in the viewfinder.  Older cameras often had rather dim focusing screens, and that f1.4 maximum aperture was helpful when using a split-image, micro prism, or fresnel-type screen.  On a digital mirrorless body, perfect focus is achievable with the manual focus assist and focus peaking.  With the aperture wide open, be advised that the depth of field is quite narrow.

A negative consideration, if it can be called negative, is that the mount is the older style breech lock, with the chrome locking ring.  Some find this offensive.  I don’t.  It simply is what it is, even though it may be less convenient than the more evolved version of the FD mount (FDn).  Those unfamiliar with the older breech-lock ring might fiddle with it initially, but will get used to it.  Compared to other mounting systems, I find it to be quite strong.

Conclusion:  I’m quite happy with both lenses overall.  If I were building a vintage Canon system, I would be well served by either lens.  For use on a digital body, either will serve up beautiful images with a small side order of nostalgia.

Other Features:  Green “A or o” Automatic aperture on locking aperture ring for program mode.