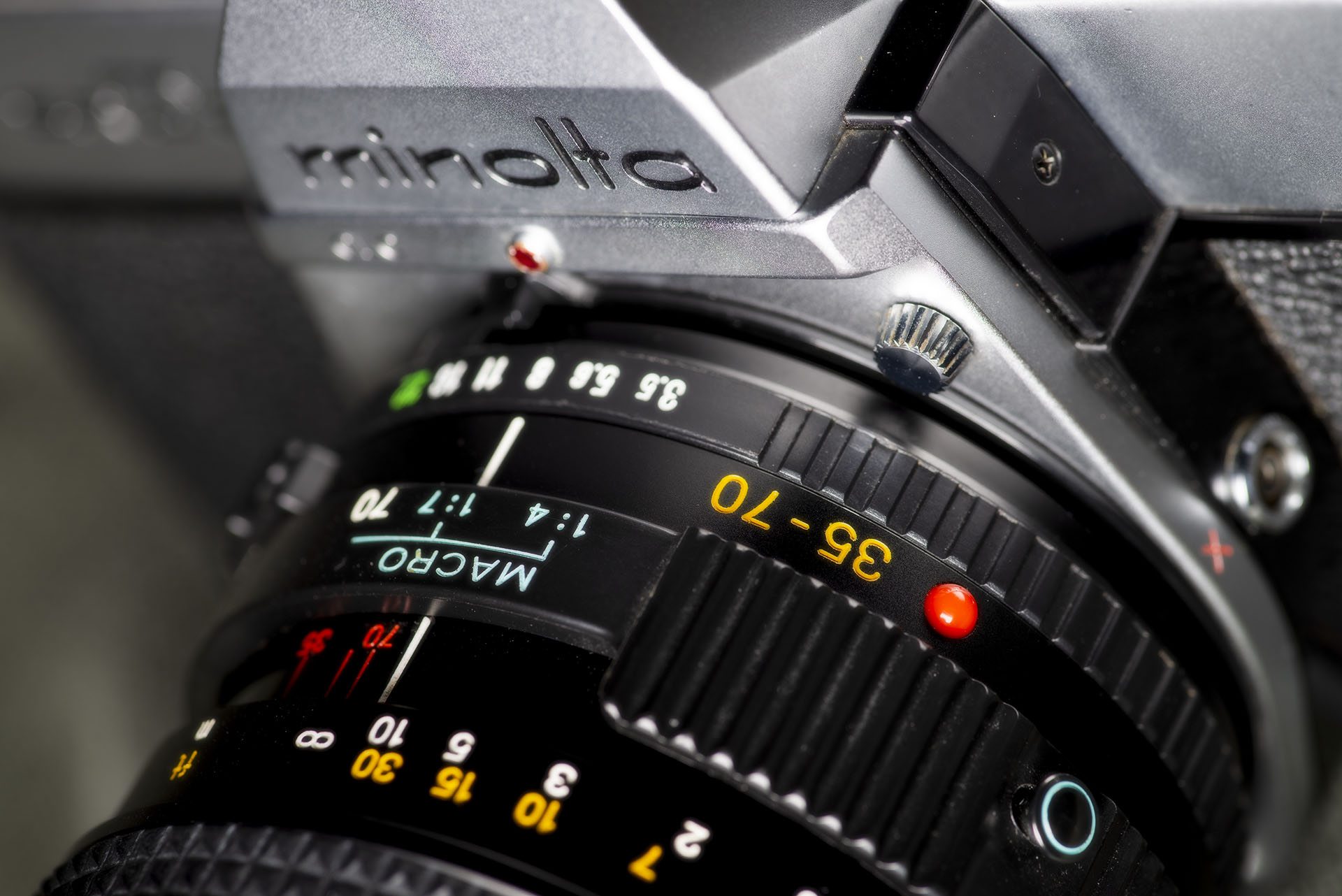 Earlier in the blog I mentioned that I have a long-standing relationship with Minolta lenses.  I have felt that for decades that they were underrated and overlooked, but I believe that is changing.  Many of Minolta’s MD and Rokkor series lenses are being recognized as excellent glass, and would rate in the “best deal for your money” category.  This lens was one of many antique store finds, and I’d be surprised if I paid more than $15 for it.  Like so many “amateur” lenses, it was in excellent condition despite its age.

Old photographers, particularly professionals, often eschew zoom lenses as being the domain of amateurs.  That was once true, and many of the early zooms produced through the 1980s were often sub-par in their image quality and construction.  They simply couldn’t compete with the speed and sharpness of a solid prime lens, and despite the benefit of their convenience, they were left behind.  Of course, this is a generalization and there were exceptions.  Every manufacturer had its gems and duds (even Nikon had the 43-86mm stain on their reputation).

Minolta produced many zoom lenses, and some stood out as being excellent.  This 35-70mm f3.5 is one of them.  Shooters were aware of Minolta’s collaboration with Leica on both body and lens design.  This lens is optically the same as the Leitz Vario-Elmar-R zoom lens of the same configuration.  Despite the association with Leitz greatness, I still don’t recall this lens getting a great deal of praise back then.  Pity…It deserved it.

Some zoom lenses have a single control ring that both focuses (by turning the ring) and zooms (by pushing/pulling the ring).  This zoom has separate control ring for each function, in addition to the aperture ring.  The zoom ring has hard stops at 35mm and at 70mm.  There is a button on the zoom ring, that when pushed, allows the ring to move into the macro range.  The macro range is between 1:4 and 1:7.  Since the focus ring is separate, a generous range of focus is available in the macro setting.

I am very happy with the image quality over all.  It is remarkably sharp for an old zoom, and even though sharpness is secondary to character for me, it holds its own.  At infinity and in the macro mode, wide and telephoto, image quality surprised me.  This lens was well thought out.  It often rides on a Minolta SRT201 for film work, for which it was designed.  For digital photos I am using this lens on a crop-sensor mirrorless, so any loss of corner sharpness becomes a non-issue.  That said, even full-frame shooters heap praise on this lens.  It simply performs well.

People are paying very high prices for f2.8 zoom lenses today, and as much as I want one, I have to remind myself that the difference in maximum aperture is only a half-stop.  F3.5 isn’t that bad.  In the macro mode, the depth of field is so thin that I wouldn’t likely be shooting wide open anyway.  In the accompanying shots the DOF is still very limited at f5.6 to f8.

As much as I love the image quality from this glass, there are a few things that I should mention about the overall user-experience.

First, there is plastic in the construction of the controls.  The  barrel, mount and filter ring are metal, but the rings are a hard plastic that, I’ll admit, feels a bit cheaper than a Nikkor or old MC Rokkor lens.  That said, the controls are still very solid, well damped, and smooth to operate.  Undoubtedly, lighter materials were chosen for weight and cost reduction, but they have survived well.

Second, finding the three separate control rings on the lens was difficult while looking through the viewfinder.  A push-pull type zoom is easier to control that way.

Third, I was focusing with the aperture wide open, then stopping down to shoot.  This is necessary with an old manual lens on a modern mirrorless camera, and not a big deal, until I started shooting in the macro mode.  I missed focus on too many shots because I moved the camera slightly while stopping down after focusing.  Clearly, a sturdy tripod is warranted when shooting macro, but I had to be extra careful not to move the camera at all while adjusting exposure after focusing.

Fourth, be advised that the front element turns when focusing.  This requires the adjustment of position-specific polarizers or graduated neutral density filters only after image is in focus.

None of these issues are deal-breakers for me.

Zoom lenses with this focal range were common in the 1980s.  Minolta adapted their 35-70mm zoom to their autofocus line and it remained popular despite not really being a generous zoom range.  35mm is barely short of normal, and 70mm isn’t a dramatic telephoto, either.  Serious wide angle lenses were 28mm and shorter, and good portrait lenses started at around 85mm.  Still, 35-70mm zoom lenses covered the “normal” range nicely for typical applications and allowed minor adjustments to the view without physically moving around.  Since this lens maintains the same effective aperture throughout the zoom range, no adjustment to the shutter speed is necessary when zooming in or out.  With a typical “amateur” setup of a 35-70 and a 70-210, one had most shots covered.

There were three iterations of the Minolta 35-70mm zoom.  The first one, introduced in 1978, had the Rokkor designation in the name.  The first two versions lacked the macro mode, which was introduced with the third version in 1983.  Another added improvement was a shorter minimum focus distance.  The general consensus is that the third is the best of the series.

Since bokeh is now a serious consideration, some mention is advised.  Specular highlights in out-of-focus areas will have a slight soap-bubble effect with a brighter ring around the circle when shot wide open.  Stopped down, the OOF highlights are heptagonal (seven-sided) due to the seven aperture blades.  In lower-contrast scenes, the bokeh is unobtrusive and pleasant to my eyes.  Naturally, there are a lot of factors that contribute to the nature of the out-of-focus areas.

Specifications are as follows: