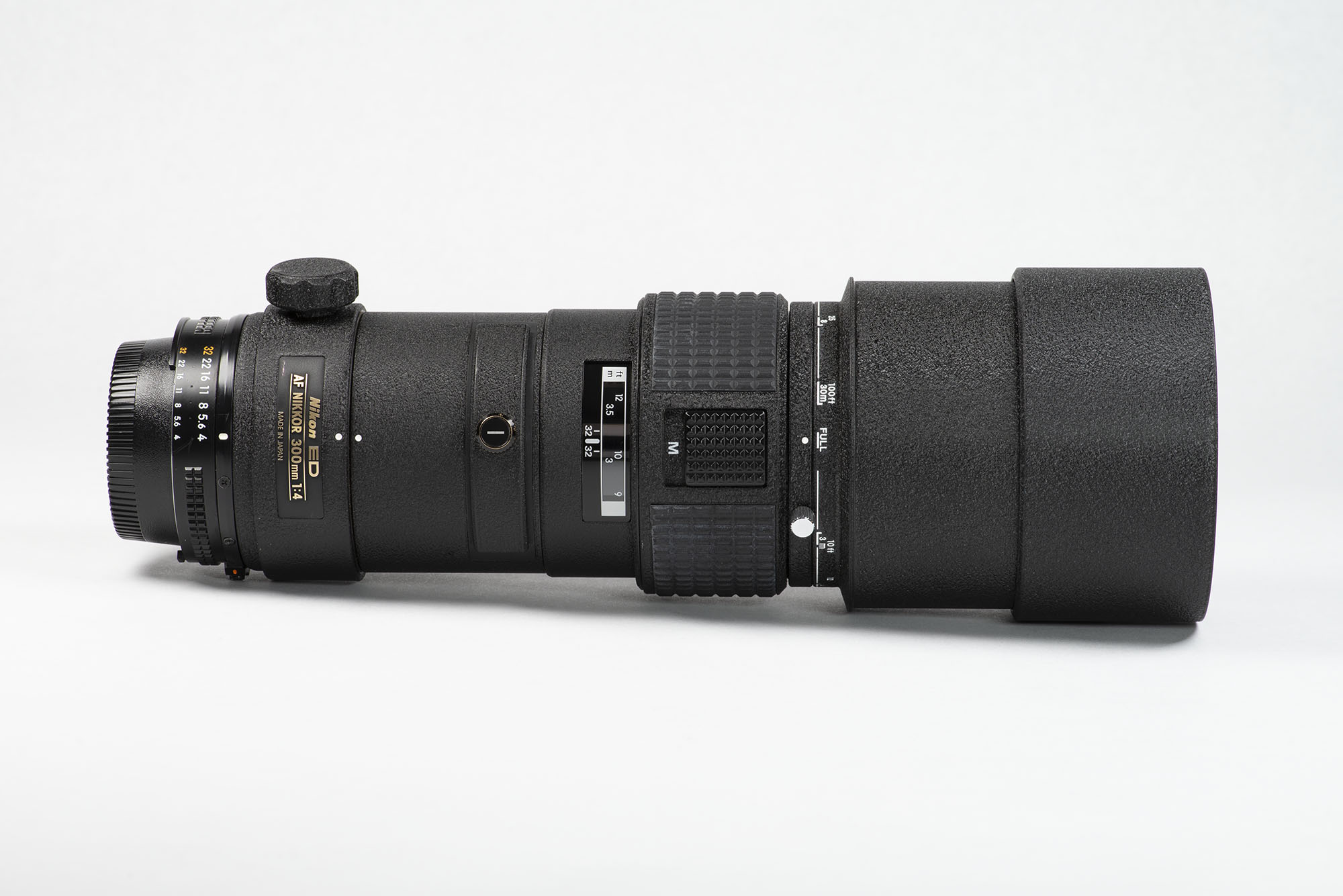 Acquired from an old friend and local pawnbroker, this lens has rekindled my affinity for long telephotos.  I have neglected my older Nikkor-H 300mm f4.5 since this one arrived in my stable.

Nikon released this leviathan around the same time camera manufacturers were moving to plastics, resulting in lighter and cheaper cameras and lenses.  That had always been one of my major complaints about the industry shift to autofocus.  I realize that plastics had come a long way since the cheap Bakelite cameras of the 1940s, but they still didn’t feel like quality machines.  I also realize that it was a necessary evolutionary step.  This lens, however, is a hefty metal and glass piece of professional gear.

For some reason, though, they still managed to sneak in a plastic button to lock the aperture ring for program modes.  That, naturally, is the piece that was broken.  Miraculously, I found a new replacement button at Northwest Camera Repair in Washington.  They shipped it the next day and I was able to replace it in minutes.  With its former glory restored, I set out to see what it would do.

This lens accompanied me on a few trips and performed beautifully.  It is well suited to wildlife and sports, as one would expect.  The long focal length allows for compressed perspective and isolation of the subject.  Because it isolates a subject, both in terms of angle of view and focus, it can be difficult to find your subject.  This is particularly the case with fast-moving sports.  I took this lens to a Renaissance fair and used it to photograph the Knights of Mayhem as they jousted.  This is a fast-moving sport and timing is difficult, but the lens proved very capable.

Chasing wildlife was equally satisfying.  I’ll admit that a 400mm or even a 600mm lens would ideal for certain wildlife.  Some animals simply don’t allow you to get very close.  There are always trade-offs when choosing gear, and cost, weight, and space constraints are real factors when traveling.  If I were a professional wildlife photographer, I would certainly roll out the big guns to ply my trade.  For the aficionado, a 300mm is a reasonable choice for reaching out to moderately distant subjects.

Most manufacturers currently offer a zoom lens that reaches 300mm, and at a reasonable cost as well.  These usually have a maximum aperture of 5.6 or so, and so that it also a consideration.  Some have significant image degradation at the long focal lengths, particularly at maximum aperture.  That, I believe, is where prime lenses hold a significant advantage.  I realize that this lens isn’t for everyone, and there are others out there that are lighter, faster, and can compete optically.  It’s still a lot of fun, though.

This 300mm has the “ED” designation, referring to “Extra-low Dispersion” glass elements.  This is one of the industry approaches to correcting chromatic aberration, and it works well.  Images are beautifully sharp, with CA corrected nicely.  Since it is a relatively heavy lens, the makers saw fit to fit it with a tripod collar.  When mounted to a tripod or monopod, this takes the strain off of the lens mount and camera’s tripod bushing.  It also balances the rig better, contributing to stability and reducing the tendency to shake.  Since this lens pre-dates optical image stabilization, camera shake is a real issue that requires planning and preventive measures.

For wildlife, I use a steady tripod.  For sports, a monopod is my preference as this allows for faster movement while following a subject.  Any camera movement during the exposure is exaggerated due to the long focal length.  In the absence of a mount, a good rest is still better than nothing.  Use your camera bag, a fencepost, tree branch, or anything that will minimize shake.  I have even used my cowboy boot draped over a rock.  Using a camera with this lens offhand, or unmounted, one must use a high enough shutter speed to limit the blur from camera movement.  The rule of thumb is the inverse of the focal length, so a minimum shutter speed for a 300mm lens would be 1/300 second.  Since I usually want to freeze action as well, I use much higher shutter speeds, and adjust my ISO on a digital camera to allow that.  On a film camera, higher speed film just makes sense.

Nikon’s autofocus mechanism changed from a body-controlled system (screw-drive) to motors located in the lens housing, following industry trends.  This lens has the older screw-drive system, which is still compatible with certain Nikon bodies.  On my D610, it works just fine, albeit slower than more modern lenses.  Of course, it can still be used as a manual focus lens on bodies that do not support the screw drive system.  The next iteration of this lens, the AF-S version, was released in 2000, and has the newer mechanism. If one is shooting exclusively digital, then newer, lighter, faster focusing lenses make sense.  This lens can be used on either Nikon film bodies or digital bodies.

One tactic for moving subjects is to manually pre-focus on where the subject is going to be at the moment of exposure.  Of course, this works for some subjects better than others, but it applies to sports or wildlife or street photography.  Switching this lens to manual focus requires sliding the switch on the lens barrel to “M” as well as switching the (digital Nikon) body to manual focus.  The switch on the lens unlocks the focus ring, and the switch on the body disengages the screw-drive mechanism.  Nikon built this lens to be used either way.  For the shot of the hawk, I manually pre-focused on the hawk as it sat in the tree and waited for it to spot a meal.

There is also a locking ring toward the front that limits the range of focus.  This prevents the camera from searching for the subject thought the entire focus range.  This was particularly useful for wildlife.  For the doe in the meadow, I knew I wasn’t going to get any closer than 25 feet, so I set the limiter ring to 25 feet.  This prevented the autofocus from locking onto grass or leaves in the foreground, or endless searching for a subject in the close ranges.  Cameras are arguably smarter these days, with algorithms that identify likely subjects (face detection and such).  Using this lens still feels old-school, albeit on a more modern camera body.

The large front element creates a demand for large filters, and at 82mm, those filters are expensive.  The engineers built in an integral filter housing that accepts 39mm drop-in filters made by Nikon.  Available types were UV, ND, Polarizer, and color-correction filters.  Unfortunately these appear to be discontinued, but are available on the used market.  Since they were compatible with other similarly-constructed telephoto lenses, many were produced.  39mm threaded filters of other brands may or may not fit the holder.  Despite having a Nikon L37c filter in the holder, I keep a Hoya UV(0) filter on the front to protect the glass.  Many a cheap filter has sacrificed its life to save an expensive lens.

Another feature that I like about this lens is the retractable built-in hood.  While lens flare seem to be well-corrected optically, I did notice a difference having the hood extended while shooting with the sun at a low angle.  Retractable hoods are more convenient than the detachable hoods, particularly when deploying or stowing the camera.  Also, I have always regarded lens hoods as another measure of physical protection against damage to the front element or filter threads.  I insist on using a hood whenever I can.

This was an unusually long post, but I wanted to cover what I thought were the most salient features of the lens.  Despite being mechanically outmoded, it is still an optical gem.  The fit, finish and haptics are still top-drawer and it feels like a professional instrument.  It is a handsome lens, with the crinkly matte finish and gold nameplate.  That it was produced during a transition to cheaper, lighter plastics tells me that the engineers both understood professional needs and had a bit of a rebellious streak, both of which I respect.

Construction:  Metal and glass, and a tiny amount of plastic